Stephen Langton and the Magna Carta 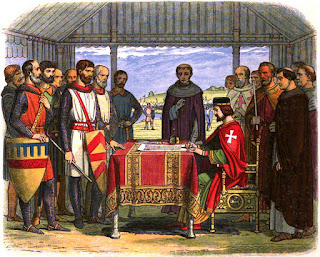 King John sealed and accepted the Magna Carta on June 15, 1215. This article by Ed West from The Catholic Herald contends, based on a study published by Thomas Andrew, that the 800th anniversary celebrations of this great event are not paying enough attention to the Catholic Church's contributions to this document:

“No account of the Magna Carta can be complete without reference to the Church. Indeed, given the prominence placed on the principle of ecclesiastical liberty within the text, no account of the Magna Carta should even begin without acknowledging the Church’s role in its formation. And yet popular thinking seems all too willing to ignore it altogether. While academic scholarship has produced some notable studies into the theological background of the Archbishop of Canterbury, material aimed at the general public has largely failed to recognise the contribution of Christian theology or the Church in the formation of the Magna Carta. When the British Library ran a series of events exploring the 800 year-old roots of ‘Britain’s struggle for freedom [and rights'] . . . [the] contribution of the Church was all but ignored. And as the professor of political science Cary Nederman points out, while commentators will often pay lip service to the principles of ecclesial liberty enshrined in the first clause of the Magna Carta, this is generally done with the attitude of someone fulfilling a formal requirement, before they can move on to the meatier parts of the text.”

To miss the role played by the Church is to “miss a crucial part of the Magna Carta’s story”, he argues. “This is particularly true of the Archbishop of Canterbury, who was instrumental not only in negotiating the Charter of 1215, but also in the important reissue of 1225 under Henry III, which confirmed the Magna Carta’s place in history. Perhaps more important than this, however, is that a failure to acknowledge the Christian theological context within which the Magna Carta arose is to miss out on an understanding of some of the most important roots of our political and intellectual heritage.”

West points out that the contributions of Stephen Langton, Archbishop of Canterbury, were crucial:

In particular Andrew addresses the unsung hero of Magna Carta, Archbishop of Canterbury Stephen Langton, who played a huge part in drawing up the treaty and implementing it.

Langton was a strange and unusual choice for the role; he was the former tutor to Pope Alexander III, and was a rather otherworldly scholar who wrote page upon page of totally impenetrable commentary on the Bible. However, there was a theme in his later writing, much of which seemed to focus on the bad kings of the Old Testament who broke God’s law and who therefore had terrible things done to them. Biblical kings, he wrote, had a book of laws written down by the priests; today’s kings though ignore the advice of priests and rule without restraint. The archbishop gave lectures in which he attacked these modern rulers who tax not out of necessity but greed and vanity, and where he said kingship was a punishment to mankind.

Read the rest of The Catholic Herald article here and the entire Theos study by Thomas Andrew here.


We should also remember that the Pentecost sequence Veni, Sancte Spiritus is usually attributed to Stephen Langton--and that, in keeping with his biblical scholarship, Langton is usually credited with dividing the books of the Holy Bible into chapters and verses.
Posted by Stephanie A. Mann at 12:30 AM