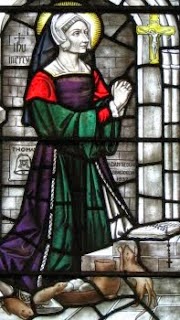 Matt Swaim and I will talk about Blessed Margaret Pole this morning on the Son Rise Morning Show in my usual time slot, after the 6:45 a.m. Central time (7:45 a.m. Eastern) news brief. Please listen live here.

EWTN posts this biography from Father Alban Butler:The life of Margaret Pole, Countess of Salisbury, was tragic from her cradle to her grave.l Nay, even before she was born, death in its most violent or dreaded forms had been long busy with her family—hastening to extinction a line that had swayed the destinies of England for nearly four centuries and a half. Her grandfather was that splendid Richard Neville, Earl of Warwick, the mighty King-maker, who as the "last of the Barons," so fittingly died on the stricken field of garnet, and whose soldier's passing gave to Shakespeare a theme worthy of some of his most affecting lines. Her father was the George, Duke of Clarence, brother of Edward IV, whose death in the Tower in January, 1478, has been attributed to so many causes. The murdered "Princes in the Tower," Edward V and his little brother, the Duke of York, were her first cousins, while her only brother, Edward, Earl of Warwick, was judicially murdered by Henry VII to ensure his own possession of the Crown. The list of tragedies in the family of the Blessed Margaret is still far from complete, but sufficient instances have been given to justify the description we have given of her whole career. . . .

The body of the Blessed Margaret, Countess of Salisbury, was interred in the Tower, in that Chapel dedicated to St. Peter's Chains, whose illustrious dead and historic associations are enshrined in Macaulay's memorable lines. She was declared Blessed with many of the rest of the English Martyrs by Leo XIII, 29th December, 1886. Others than her co-religionists, no doubt, like to reflect that a life, so marked by piety, and so full of griefs ever heroically borne, has after the lapse of nearly four centuries been thus honoured, and that the last direct descendant of the Plantagenet line has her place in the Hagiography of the Church so long associated with their sway. 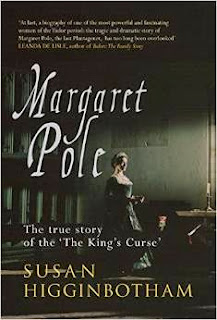 There is a new biography of Blessed Margaret Pole, written by Susan Higginbotham and published by Amberley (due out on August 15 this year):

Of the many executions ordered by Henry VIII, surely the most horrifying was that of sixty-seven-year-old Margaret Pole, Countess of Salisbury, hacked to pieces on the scaffold by a blundering headsman. From the start, Margaret’s life had been marred by tragedy and violence: her father, George, Duke of Clarence, had been executed at the order of his own brother, Edward IV, and her naïve young brother, Edward, Earl of Warwick, had spent most of his life in the Tower before being executed on the orders of Henry VII. Yet Margaret, friend to Catherine of Aragon and the beloved governess of her daughter Mary, had seemed destined for a happier fate, until religious upheaval and rebellion caused Margaret and her family to fall from grace. From Margaret’s birth as the daughter of a royal duke to her beatification centuries after her death, Margaret Pole: The Countess in the Tower tells the story of one of the fortress’s most unlikely prisoners.
Posted by Stephanie A. Mann at 12:30 AM