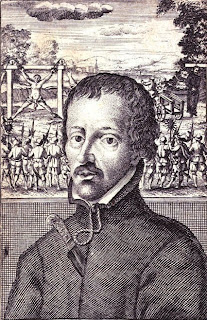 Joanna Bogle highlighted the annual Tyburn Lecture on her blog and provided a link to a synopsis of the lecture, which focused on how St. Edmund Campion cited the Magna Carta in his defense at trial for Treason in 1581:

The lecture gave a legal analysis of the case against the Jesuit martyr St Edmund Campion to comment on state oppression and religious freedom in England in the late sixteenth century, and how this resonated down the centuries.

The British values and identity narrative we hear so strongly today is one of a tradition of tolerance. So it was most interesting to learn that Elizabethan/Jacobean England was the most intolerant state in Europe: more Catholics were judicially murdered here than anywhere else. Catholics in the Protestant states of Germany and the Dutch Republic had freedom of conscience and worship. Protestants in Catholic France, Poland and even in Spain ran fewer risks than did Catholics in England. This was much commented on in Europe at the time of Campion’s trial.

Campion was accused under the Treason Act of 1350. Elizabeth wanted to be seen as a tolerant monarch who could encourage freedom of expression. England was at that time sending military support to the Dutch Protestants in their struggle against their Spanish overlords, in order to uphold their rights to freedom from oppression.

Sir Michael explained that there was no evidence presented at the trial to demonstrate Campion’s guilt under the Treason Act. He admitted breaking the law by saying Mass but this was not a crime under the Treason Act. On his return to England in 1580 as an ordained Catholic priest Campion had issued a public statement (known as the Bragge) addressed to the Queen’s Council declaring his loyalty to the Queen alongside an appeal for the right to debate the merits of the true faith.

In his presentations to the court Campion claimed four specific natural rights which go back to Magna Carta:

· The right not to incriminate himself (i.e. to remain silent)

· The right to freedom of expression.

This presentation is important because it demonstrates how Elizabethan courts were denying prisoners their rights under English law: this is not applying a standard of rights in our era, but in Campion's own. The presentation is timely because England is celebrating the 800th anniversary of the Magna Carta. See for example this page at the British Library.

St. Thomas More also cited the Magna Carta at his trial in 1535, arguing that Parliament's law making Henry VIII the Supreme Head and Governor and other laws restricting the rights of the clergy to appeal to Rome (The Act in Restraint of Appeals for example), violated its primary purpose: defense of the Church. As this website notes:

More was tried at Westminster on the 6th July 1535. In responding to the guilty ruling he first argued that the act of supremacy was directly repugnant to the laws of God and the Church, “the Supreme Government of which, or of any part thereof, no Temporal Person may by any Law presume to take upon him, being what right belongs to the See of Rome, which by special Prerogative was granted by the Mouth of our Savior Christ himself to St.Peter, and the Bishops of Rome his Successors only”. More went further though. Not only was the act contrary to the laws which governed the Church, it was also contrary to the rights of the Church as defined by Magna Carta, the first clause of which reads:
FIRST, THAT WE HAVE GRANTED TO GOD, and by this present charter have confirmed for us and our heirs in perpetuity, that the English Church shall be free, and shall have its rights undiminished, and its liberties unimpaired.
Posted by Stephanie A. Mann at 12:30 AM