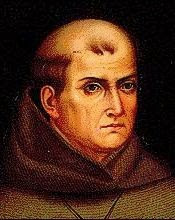 From First Things, author Stephen Schwartz places the controversy over the upcoming canonization of Blessed Junipero Serra in context, noting that the moral outrage may be misplaced:

Here in California, the Pope’s intention has reignited an old controversy. Serra has been accused by self-appointed representatives of Native Americans of “genocide.” Most of this polemic is carried out in the media and rests on thin documentation. These allegations of cruelty, exploitation, and mass murder against Serra and other Franciscan and Jesuits in the Californias—Lower and Upper, Baja and Alta—echo Protestant anti-Catholic bigotry, which dominated the United States during the early period of independence. Once California became the object of a Gold Rush, Easterners had every incentive to deny the rights of the colony’s Spanish and Mexican residents, as they did later in acts of violence against “Chilean” and Chinese miners, followed by long-lasting prohibition on other Asian immigrants.

If we wish to study the history of violence against the Indians, we should turn to that later episode, the 1849 gold rush. It’s a history San Franciscans take pride in, even having a football team bearing the 49er name. Meanwhile, the newspaper for which I worked from 1989 to 1999, the San Francisco Chronicle, refuses to print references to the Washington Redskins football team. The editors argue that the name is racist, and the newspaper refers to the franchise only as “the Washington, DC football team.”

Avaricious pioneers like the 49ers committed far worse depredations against the natives than did the missionaries. Two anthropologists, Lowell J. Bean and Sylvia B. Vane, wrote in the 1978 edition of the Handbook of North American Indians:

Some native Californians were Christianized only by force, [but] others accepted the new religion apparently because the Spanish demonstrated possession of kinds of power that appeared desirable. The acceptance of Christianity did not mean that native religious systems disappeared. Native religious ceremonies persisted alongside Catholicism, often tolerated by the priests under the guide of ‘secular’ events, but sometimes carried out secretly. The extreme decrease in native population in the last part of the nineteenth century and the concomitant ‘melting pot’ philosophy on the part of the Anglo-Americans were more destructive to native religious systems than Catholicism.

It is true that some California natives resisted the missionaries; for example, in 1775 the mission at San Diego was destroyed in a revolt by nine Indian villages. The attackers killed a Mallorcan priest, Fr. Lluís Jaume Vallespir. Serra appealed to the Spanish authorities to spare the perpetrators, however. This call for mercy was successful, and the insurgents were pardoned.

Blessed Junípero Serra stands for a period in history that is unknown by most Americans. How many people could even answer the question of the origin of the name “San Francisco”? Let us hope that his canonization will inspire further and deeper discussion of the arrival of Christianity to the American West.

To paraphrase Pope Francis, "Who is the San Francisco Chronicle to judge?" Seriously, the same trend is popping up in headlines re: Father Serra as for Thomas More during the airing of Wolf Hall: Saint or Sinner?

When the Church beatifies or canonizes any man or woman, we do not declare that he or she is perfect according to whatever secular standards apply at the time. As G.K. Chesterton wrote "There are saints indeed in my religion: but a saint only means a man who really knows he is a sinner." (from "The High Plains" in Alarms and Discursions a collection of essays Chesterton wrote for the London Daily News from 1901 to 1913).
Posted by Stephanie A. Mann at 1:00 AM