Reading Abbey: The Lost Tomb and the Last Abbot 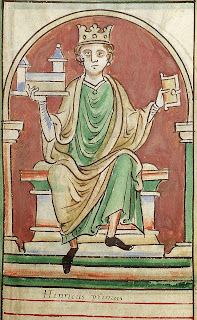 According to the BBC History Magazine, researchers might find the burial site of King Henry I (William the Conqueror's fourth son) which has been lost since Reading Abbey was suppressed in the Dissolution of the Monasteries.

A search for the remains of Henry I’s ‘lost’ abbey could confirm the whereabouts of the 12th-century king’s sarcophagus – and, in parallels with the recent search for Richard III, it’s possible that it could be located beneath what is now a car park.

The Hidden Abbey Project aims to uncover the full extent of Reading Abbey, which was largely destroyed in 1539 during the dissolution of the monasteries. It has been instigated by Philippa Langley, well known for leading the search for Richard III’s remains in Leicester. Langley has secured the support of Historic England – formerly known as English Heritage – and in 2016 the project team will carry out ground-penetrating radar (GPR) research of the abbey area, followed by ‘trial trenching’ to estimate the site’s archaeological potential. It is hoped that the imaging might show sarcophagus burials, possibly including that of Henry.

“There is believed to be a pristine Cluniac abbey layout buried beneath the ground at Reading,” Langley told BBC History Magazine. “One of the main aims of the project is to confirm the exact positioning of the abbey church, as well as its size and structure. Sarcophagus burials tend to show up very clearly in GPR research, and potentially we might be able to see several.

“What’s really exciting is that we know that Henry was buried in front of the high altar, with members of his family buried in specific locations around him. The thinking in Reading, using current estimates of the size of the abbey, is that this burial spot is located beneath a school. If the abbey is larger, it could be situated underneath either what is today a playground or a car park. That option is considered less likely, but if Henry’s tomb is beneath the car park, that will be very interesting.”

Henry founded Reading Abbey in 1121 as a royal mausoleum, and is buried there along with his second wife, Adeliza, and great-grandson William of Poitiers. Langley is eager to stress that, while the potential to find his sarcophagus burial is exciting, the main aim of the project is to find out as much as possible about the abbey itself – and what happens next will be the decision of Historic England.

Read the rest of the article here.

Of course, it was not just the abbey that was destroyed and pulled down. Its last abbot was literally torn apart: hung, drawn and quartered as a traitor to Henry VIII. According to this British History Online entry for Reading Abbey, Thomas Cromwell had to circumvent the law to make sure that Abbot Hugh Faringdon Cook was found guilty and punished because he refused to surrender the Abbey of the Blessed Virgin Mary and St. John the Evangelist, established by Henry I in 1121 "for the salvation of my soul, and the souls of King William, my father, and of King William, my brother, and Queen Maud, my wife, and all my ancestors and successors":

According to all current law, Abbot Hugh, a mitred abbot, who had sat in many a Parliament, ought to have been arraigned for high treason before Parliament; but Cromwell set law completely at defiance, and Hugh, with two brother abbots, had been cut to pieces by the common executioner ere Parliament reassembled.

On 15 November, the same day that the abbot of Glastonbury was done to death at Glastonbury, the abbot of Reading, with two priests, suffered the butchery reserved for traitors on a platform outside the gateway of his own abbey, decked with the gallows for partially hanging, the knife for disgustingly mutilating the still living body, and the caldron of boiling pitch into which to fling the limbs when the quartering was accomplished. With him suffered John Eynon, a priest attached to St. Giles', Reading, and John Rugg, a former prebendary of Chichester, who had retired to the monastery of Reading.

At the Public Record Office are thirty-three pages of a closely-written mutilated manuscript concerning Abbot Hugh and the two priests executed with him. It is in an educated but unidentified handwriting. The occasion for which it was written and its author are both unknown. From its presence among these state papers it was probably the work of some tool of Cromwell's, and was perhaps intended to be printed and circulated to try to stem the odium excited by the execution of 'my lord of Reading.' It is impossible to exaggerate the ribaldry and low scurrility of this infamous production. Great play is made on the name 'Cook,' and the king is supposed to have raised a mere kitchen scullion to this exalted position. The king is represented as the bountiful benefactor of Abbot Hugh, who has repaid him with the most dastardly treachery —'if he had lived when Christ was betrayed he would have put Judas out of his office,' and again he was 'able to teach even Judas the part of a traitor.' Such a sentence as 'a ragman's roll of old rotten monks, and rusty friars, and pockyd priests' is a fair sample of this literary reviler. No attention would have been paid to this stuff, only that its very virulent violence and total absence of any definite charge of treason against the king is a strong proof that no true treason, as ordinarily understood, existed. The worst that could be said of the abbot is that he is accused of stating that 'he wolde pray for the pope's holynes as long as he lived and wolde ons a weke saye masse for hym.' The writer also unconsciously bears witness to the integrity of the abbot, stating that he was ever a great student and setter forth of St. Benet's, St. Francis's, St. Dominic's, and St. Augustine's rules as being right holy and of great perfectness; adding that he never left mattins unsaid, spoke loud in the cloister, or ate even eggs on a Friday. (fn. 87)

Marillac, the French ambassador, writing to Francis I on 30 November, states that the remains of the abbot of Reading were hanged and left in chains outside the abbey gateway. (fn. 88)

With the execution of Abbot Hugh, this great monastery, wherein for the four centuries of its existence kings and queens had been lodged and the poorest entertained, where great councils of the Church and Parliaments of the state had frequently been held, and which had been a great centre of almsgiving and of a liberal education, passed absolutely into the hands of Henry VIII, together with its property, declared to be of the clear annual value of £1,908 14s. It remained uninterruptedly in the immediate control of the crown down to the Commonwealth.

The vast conventual church, where the remains of royalty and other notables had been laid to rest, remained desolate, but undisturbed so far as its fabric was concerned, until 1548. The lead on the roof of the abbey church and buildings was then so considerable that the amount helps to form some idea of the extent of the premises. It was measured and estimated to weigh 417 fodders, at the rate of 15 ft. sq. to the fodder. Six great bells still swung in the monastery's belfry. (fn. 89)

P.H. Ditchfield and William Page edited this history of the Abbey of Reading in 1907--pretty clear what their author thought of Henry VIII and Thomas Cromwell!

Hugh Faringdon and companions were beatified by Pope Leo XIII in 1895.
Posted by Stephanie A. Mann at 1:00 AM