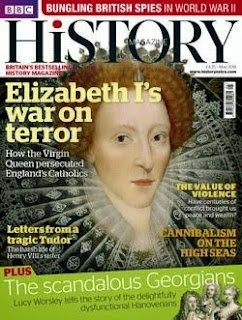 Jessie Childs wrote about recusant and penal laws passed against Catholics in Elizabethan England for the BBC History Magazine when her book God's Traitors was released last year:

Under Elizabeth I, Catholics grew adept at concealment. Their lifeblood – the Mass – was banned. Anyone who heard it risked a fine and prison. Hence the need for secret Mass-kits and altar-stones small enough to slip into the pocket. Their priests – essential agents of sacramental grace – were outlawed.

Reconciling anyone to Rome (and, indeed, being reconciled) was made treason. After 1585, any priest ordained abroad since 1559, and found on English soil, was automatically deemed a traitor and his lay host a felon, both punishable by death. Hence the need for priest-holes, like the one at Harvington Hall, or at Hindlip, where a feeding tube was embedded in the masonry.

Even personal devotional items like rosary beads or the Agnus Dei found at Lyford were regarded with suspicion, since a statute of 1571 had ruled that the receipt of such ‘superstitious’ items, blessed by the pope or his priests, would lead to forfeiture of lands and goods.

It is impossible to know how many Catholics there were in Elizabethan England, for few were willing to be categorised and counted. John Bossy (defining a Catholic as one who habitually, though not necessarily regularly, used the services of a priest) estimated some 40,000 in 1603, less than one per cent of the population.

This was not a homogenous group, rather a wide and wavering spectrum of experience. Many were branded ‘church papists’: they attended official services according to law, but some conformed only occasionally or partially. William Flamstead read his book during the sermon “in contempt of the word preached”, while for two decades of attendance Sir Richard Shireburn blocked his ears with wool.

Read the rest of the article on the BBC History Magazine website.
Posted by Stephanie A. Mann at 12:30 AM