Speaking of Persecution: In the WSJ 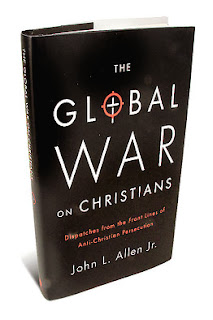 Philip Jenkins reviews John L. Allen, Jr.'s book, The Global War on Christians for The Wall Street Journal:
On Oct. 31, 2010, a dozen Islamist gunmen stormed the Catholic cathedral of Our Lady of Salvation, in Baghdad. Striking during a service, they butchered some 60 priests and worshipers, notionally in revenge for insults to Islam. Ghastly as that crime might be in its own right, atrocities of this kind are quite commonplace around the world. Mobs sack churches in Egypt, Nigerian suicide bombers target worshiping congregations, and Eritrea has its hellish concentration camps for Christians. "Christians today," writes John L. Allen Jr. , "indisputably are the most persecuted religious body on the planet." So widespread and systematic are the attacks, he explains, that they amount to a global war, which he proclaims "the transcendent human rights concern" in the modern world.
Mr. Allen is by no means the first writer to address this phenomenon, but he may be the best qualified. He has through the years established himself as among the best-informed commentators on the Vatican and the state of the Roman Catholic Church, and hearing so many contacts recount stories of persecution and discrimination has naturally sensitized him to anti-Christian campaigns, and by no means only those directed against Catholics. . . .
In cruder hands, "The Global War on Christians" could easily have turned into an anti-Islamic rant. Yet while Mr. Allen devotes full attention to the evil deeds of Islamists in Iraq, Nigeria and elsewhere, he also refutes the myth "that it's all about Islam." Over the past century, some of the very worst anti-Christian persecutors have been fanatically anti-religious, commonly driven by Marxist-Leninist ideology. Islam, evidently, has nothing to do with the atrocities of the North Korean regime, which has made its country perhaps the worst single place in the world to be a Christian: The government has killed thousands of Christians and imprisoned tens of thousands more, in hideous conditions. Nor does Mr. Allen succumb to the common temptation to concentrate so much on Muslim misdeeds that we ignore savage and persistent persecutions by Hindu fanatics—the pogroms, the forced conversions, the mob attacks against churches, often committed with the tacit acquiescence of police and local governments.
Read the rest here. Coming from Philip Jenkins of Baylor University, that's a trust- and attention worthy review.
Posted by Stephanie A. Mann at 2:00 AM