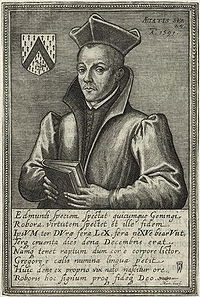 St. Swithun Wells was hanged for NOT attending a Catholic Mass in Elizabethan England. His wife Alice attended the Mass held in his house near Gray's Inn in London, but he wasn't there when the priest hunters burst in during the Mass celebrated by Father Edmund Gennings. Those attending held the pursuivants off. His wife, Fathers Gennings (pictured here) and Polydore Plasden, and three other laymen, John Mason, Sidney Hodgson, and Brian Lacey were arrested at the end of the Mass. Swithun was arrested when he came home.


At his trial, he said he wished he could have attended that Mass and that was enough for the Elizabethan authorities! He was hung near his home on Gray's Inn Road in London, and he spoke to Richard Topcliffe before he died, hoping that this persecutor and torturer of Catholics would convert! He said, "I pray God make you a Paul of a Saul, of a bloody persecutor one of the Catholic Church's children." St. Swithun as a school master had for a time conformed to the official church but then had returned to the Catholic faith.

As he was led to the scaffold, Wells saw an old friend in the crowd and called out to him: "Farewell, dear friend, farewell to all hawking, hunting, and old pastimes. I am now going a better way"!


St. Swithun's wife Alice received a reprieve from her death sentence, but died in prison in 1602. The two priests and the other three laymen were all executed on December 10. Sir Walter Raleigh was present at the execution and heard Father Polydore pray for Queen Elizabeth. Raleigh then asked him about his loyalty to Queen Elizabeth as the rightful ruler of England and liked his answers, so ordered him to be hung until dead, thus avoiding the rest of the torture of his execution. On the other hand, Topcliffe made sure that Father Gennings suffered all the tortures of being hung and quartered: he was left to hang but a short time and was fully conscious as the executioner started cutting him up. Father Gennings had said, "I know not ever to have offended the Queen. If to say Mass be treason, I confess to have done it and glory in it."

The two priests and the house owner have been canonized: St. Edmund Gennings, St. Polydore Plasden, and St. Swithun Wells--among the Forty Martyrs of England and Wales in 1970. The two laymen who helped defend St. Edmund Gennings at Mass and were sentenced to death for that felony (sic) were beatified (Blessed John Mason and Blessed Sidney Hodgson) by Pope Pius XI in 1929. 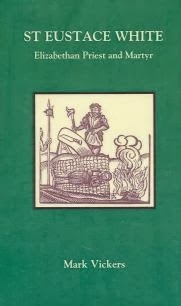 But these were not the only martyrdoms in London that day in 1591--Father Eustace White and layman Brian Lacey were executed at Tyburn. St. Eustace White was a convert to Catholicism--his anti-Catholic father cursed him and White endured permanent estrangement from his family. In 1584 Eustace began studies for the priesthood in Rheims, France and Rome, Italy, and was ordained at the Venerable English College in Rome in 1588. In November 1588 he returned to the west of England to minister to covert Catholics. The Church was going through a period of persecution in England, made even worse by the attack of the Armada from Catholic Spain. Arrested in Blandford, Dorset, England on 1 September 1591 for the crime of being a priest. He was lodged in Bridwell prison in London, and repeatedly tortured.

He endured the torture technique developed by Richard Topcliffe and used on St. Robert Southwell and others, being hung by the wrists. As he wrote to Fr. Henry Garnet, SJ from prison:

"The morrow after Simon and Jude's day I was hanged at the wall from the ground, my manacles fast locked into a staple as high as I could reach upon a stool: the stool taken away where I hanged from a little after 8 o'clock in the morning until after 4 in the afternoon, without any ease or comfort at all, saving that Topcliffe came in and told me that the Spaniards were come into Southwark by our means: 'For lo, do you not hear the drums' (for then the drums played in honour of the Lord Mayor). The next day after also I was hanged up an hour or two: such is the malicious minds of our adversaries."

At his trial he forgave the judges who sentenced him to death. He is also one of the Forty Martyrs of England and Wales. You could read more about him in this book.

Brian Lacey was a Yorkshire country gentleman. Cousin, companion and assistant to Blessed Father Montford Scott. Arrested in 1586 for helping and hiding priests. Arrested again in 1591 when his own brother Richard betrayed him, Brian was tortured at Bridewell prison to learn the names of more people who had helped priests. Finally arraigned down the Old Bailey, he was condemed to death for his faith, for aiding priests and encouraging Catholic. Pope Pius XI also beatified him in 1929. Blessed Brian Lacey was also related to Blessed William Lacey, a 1582 martyr in York.
Posted by Stephanie A. Mann at 12:30 AM