From G.K. Chesterton's "The Everlasting Man" 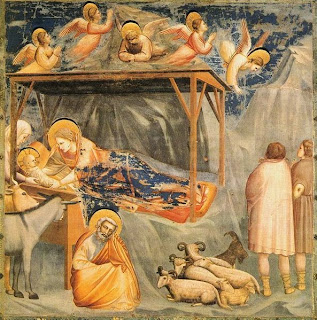 Part II, Chapter One, "The God in the Cave":

Chesterton demonstrates the glorious beauty of Our Mother Mary and her Child: if we ignore Mary when we try to understand Who Jesus Christ  is ("God from God, Light from Light, True God from True God", who "came down from heaven, and by the Holy Spirit was incarnate of the Virgin Mary, and became man") we will end up taking "Christ out of Christmas or Christmas out of Christ":

Bethlehem is emphatically a place where extremes meet. Here begins, it is needless to say, another mighty influence for the humanization of Christendom. If the world wanted what is called a non-controversial aspect of Christianity, it would probably select Christmas. Yet it is obviously bound up with what is supposed to be a controversial aspect (I could never at any stage of my opinions imagine why); the respect paid to the Blessed Virgin. When I was a boy a more Puritan generation objected to a statue upon my parish church representing the Virgin and Child. After much controversy, they compromised by taking away the Child. One would think that this was even more corrupted with Mariolatry, unless the mother was counted less dangerous when deprived of a sort of weapon. But the practical difficulty is also a parable. You cannot chip away the statue of a mother from all round that of a newborn child. You cannot suspend the new-born child in mid-air; indeed you cannot really have a statue of a newborn child at all. Similarly, you cannot suspend the idea of a newborn child in the void or think of him without thinking of his mother. You cannot visit the child without visiting the mother, you cannot in common human life approach the child except through the mother. If we are to think of Christ in this aspect at all, the other idea follows I as it is followed in history. We must either leave Christ out of Christmas, or Christmas out of Christ, or we must admit, if only as we admit it in an old picture, that those holy heads are too near together for the haloes not to mingle and cross. 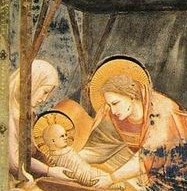 (I think the Giotto portrayal of the Blessed Virgin Mary and baby Jesus, with their heads so close together and their eyes so clearly meeting, represents the haloes mingling and crossing very well.)

Chesterton examines the roles of the shepherds (who find their Shepherd), the Three Kings of Orient (who find Someone greater than their philosophy), and Herod the King (who fears a Baby born in a manger and slaughters the Innocents), and then looks at our role today, as we find "something more human than humanity" in the story and reality of Christmas--God With Us.

This is the trinity of truths symbolised here by the three types in the old Christmas story; the shepherds and the kings and that other king who warred upon the children. It is simply not true to say that other religions and philosophies are in this respect its rivals. It is not true to say that any one of them combines these characters; it is not true to say that any one of them pretends to combine them. Buddhism may profess to be equally mystical; it does not even profess to be equally military. Islam may profess to be equally military; it does not even profess to be equally metaphysical and subtle. Confucianism may profess to satisfy the need of the philosophers for order and reason; it does not even profess to satisfy the need of the mystics for miracle and sacrament and the consecration of concrete things. There are many evidences of this presence of a spirit at once universal and unique. One will serve here which is the symbol of the subject of this chapter; that no other story, no pagan legend or philosophical anecdote or historical event, does in fact affect any of us with that peculiar and even poignant impression produced on us by the word Bethlehem. No other birth of a god or childhood of a sage seems to us to be Christmas or anything like Christmas. It is either too cold or too frivolous, or too formal and classical, or too simple and savage, or too occult and complicated. Not one of us, whatever his opinions, would ever go to such a scene with the sense that he was going home. He might admire it because it was poetical, or because it was philosophical, or any number of other things in separation; but not because it was itself. The truth is that there is a quite peculiar and individual character about the hold of this story on human nature; it is not in its psychological substance at all like a mere legend or the life of a great man. It does not exactly in the ordinary sense turn our minds to greatness; to those extensions and exaggerations of humanity which are turned into gods and heroes, even by the healthiest sort of hero-worship. It does not exactly work outwards, adventurously, to the wonders to be found at the ends of the earth. It is rather something that surprises us from behind, from the hidden and personal part of our being; like that which can some times take us off our guard in the pathos of small objects or the blind pieties of the poor. It is rather as if a man had found an inner room in the very heart of his own house, which he had never suspected; and seen a light from within. It is as if he found something at the back of his own heart that betrayed him into good. It is not made of what the world would call strong materials; or rather it is made of materials whose strength is in that winged levity with which they brush us and pass. It is all that is in us but a brief tenderness that is there made eternal; all that means no more than a momentary softening that is in some strange fashion become a strengthening and a repose; it is the broken speech and the lost word that are made positive and suspended unbroken; as the strange kings fade into a far country and the mountains resound no more with the feet of the shepherds; and only the night and the cavern lie in fold upon fold over something more human than humanity.
Posted by Stephanie A. Mann at 12:30 AM