An Advent Hymnn for Christ's Second Coming: The Dies Irae 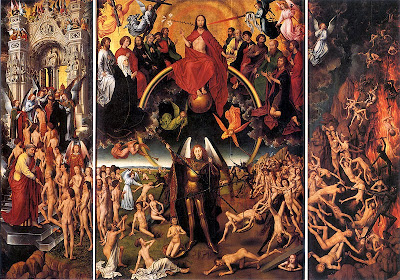 If we think of the Dies Irae, The Day of Wrath, we think of it as the sequence in the Catholic Requiem Mass according to the Extraordinary Form of the Latin Rite--but it is the ultimate Advent hymn to proclaim Christ's Second Coming, which the first part of Advent anticipates. Here is a translation by the Very Reverend James Ambrose Dominic Aylward:

That day of wrath and grief and shame,
Shall fold the world in sheeted flame,
As psalm and Sibyl songs proclaim.

What terror on each breast shall lie
When, downward from the bending sky,
The judge shall come our souls to try.

The trump, through death's dominions blown,
Shall summon with a dreadful tone
The buried nations round the throne.

Nature and death in dumb surprise
Shall see the ancient dead arise,
To stand before the judge's eyes.

And lo, the written book appears,
Which all that faithful record bears,
From whence the world its sentence hears.

The Lord of judgment sits him down,
And every secret thing makes known ;
No crime escapes his vengeful frown.

Ah, how shall I that day endure ?
What patron's friendly voice secure,
When scarce the just themselves are sure ?

O king of dreadful majesty,
Who grantest grace and mercy free,
Grant mercy now and grace to me.

Good Lord, 'twas for my sinful sake,
That thou our suffering flesh didst take ;
Then do not now my soul forsake.

Thou soughtest me when I had strayed ;
Thy blood divine my ransom paid ;
Shall all that love be fruitless made ?

O just avenging judge, I pray,
For pity take my sins away,
Before the great accounting-day.

I groan beneath the guilt, which thou
Canst read upon my blushing brow ;
But spare, O God, thy suppliant now.

Thou, who didst Mary's sins unbind,
And mercy for the robber find,
Dost fill with hope my anxious mind.

Though worthless all my prayers appear, S
till let me not, my Saviour dear,
The everlasting burnings bear.

Give me at thy right hand a place,

Amongst thy sheep, a child of grace,
Far from the goats' accursed race.

Yea, when thy justly kindled ire
Shall bind the lost in chains of fire,
Oh, call me to thy chosen choir.

Lo, here I plead and suppliant bend,
Nor cease my contrite heart to rend,
That so thou spare me in the end.

Oh, on that day, that day of weeping,
When man shall wake from death's dark sleeping,
To stand before his judge divine,

Save, save this trembling soul of mine :
Yea, grant to all, O Saviour blest,
Who die in thee, the saints' sweet rest.

The original sequence is attributed to Thomas of Celano, a Franciscan from the thirteenth century. The translator, the Very Reverend James Ambrose Dominic Aylward, was a

Theologian and poet, born at Leeds, 4 April, 1813; died at Hinckley (England), 5 October, 1872. He was educated at the Dominican priory of Hinckley, entered the Order of St. Dominic, was ordained priest in 1836, became provincial in l850, first Prior of Woodchester in 1854, and provincial a second time in 1866. He composed several pious manuals for the use of his community and "A Novena for the Holy Season of Advent" gathered from the prophecies, anthems, etc., of the Roman Missal and Breviary (Derby, 1849). He reedited (London, 1867) a "Life of Blessed Virgin St. Catherine of Sienna", translated from the Italian by the Dominican Father John Fen (Louvain, 1609), also an English translation of Father Chocarne's "Inner Life of Lacordaire" (Dublin, 1867). His essays '' On the Mystical Elements in Religion, and on Old and Modern Spiritism " were edited posthumously by Cardinal Manning (London, 1874). Father Aylward's principal monument is his translation of Latin hymns, most of which he contributed to "The Catholic Weekly Instructor." In his "Annus Sanctus" (London, 1884) Orbey Shipley has reprinted many of them. He says of Father Aylward that he was "a cultivated and talented priest of varied powers and gifts."
Posted by Stephanie A. Mann at 12:30 AM