The Sisters Who Would Be Queen 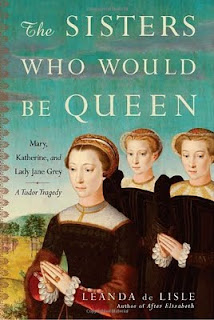 The Sisters Who Would Be Queen: Mary, Katherine, and Lady Jane Grey: A Tudor Tragedy by Leanda de Lisle

As a follow-up to my comments on the execution of Lady Jane Grey, here is a link to my review of the Leanda de Lisle book I referenced. I wrote this B.B. (before blog) and Elena-Maria Vidal kindly shared it as a guest post on her great blog, Tea at Trianon, in November of 2009.

The auther herself signed in and commented on the review and the comments!

And here is a discussion of the book by the author from an Economist imprint titled More Intelligent Life:

"Lady Jane Grey is mythologised, even festishised, as an innocent girl sacrificed on the altar of her mother's ambition. But behind the popular biographies of the Tudor Queen lies a different story of misogyny and masochism. It seems the much-maligned mother is in fact the victim.

"When I began researching for "The Sisters Who Would be Queen", my triple biography of Lady Jane and her sisters, Katherine and Mary Grey, I hoped the well-known life of the iconic teenage Queen, would lend some insight to the younger sisters, the forgotten heirs to Elizabeth Tudor. I assumed there would be little new to day about Jane herself. But as I began my research it became clear that nothing written about Jane could be trusted. The first woman to wield the power of a Tudor monarch had been reduced, over time, to an eroticised image of female helplessness. Meanwhile, her conventional mother became the embodiment of the belief that powerful women are monstrous and mannish."