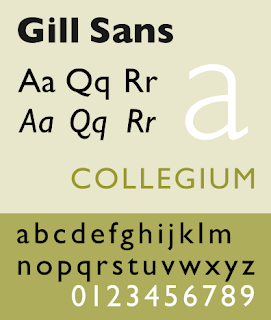 (Specimen of the typeface Gill Sans by Jim Hood)
The controversial Eric Gill was born on February 22, 1882. He was a sculpter, type-face designer and printer maker--an artist-craftsman like William Morris. He designed the Stations of the Cross at Westminster Cathedral. Raised in a cult, he became an Anglican and then joined the Catholic Church in 1913. He was also a Distributist, like Chesterton, Belloc and other Catholics about that time. The Eric Gill Society publishes this biography, but revelations of his personal behavior, based on his diaries, in Fiona MacCarthy's 1981 biography were shocking. The British Museum is currently presenting an exhibition of some of his works and the description mentions that controversy:
The exhibition features work by Gill intended for both public use and private delight, including stamp designs for the Post Office, coin designs for the Royal Mint, drawings for the Stations of the Cross, and his own engravings and publications on religion, politics and art. The centrepiece of the display is his famous sculpture Divine Lovers, on loan from Ditchling Museum in East Sussex. The display also examines Gill’s work on the British Museum building itself, including the war memorial at the main entrance.
The display concentrates attention on Gill’s art and ideas, rather than focusing on the sensational aspects of his private life which have become dominant in recent years. The showcasing of both Gill’s private work and his little-known public commissions deals with the entwining complexities of his art, life and ideals, and the contradictions that often emerged.

The revelations of his personal behavior (which I am not going to name here; you can see what Fiona MacCarthy found linked above) have given rise to attacks on his art, on his being a Catholic and the Church sponsoring his art, and even on Distributism--as though his personal sins make that economic theory untenable. When his behavior was revealed, some called for the removal of the Stations of the Cross at Westminster. Such a debate resembles that over Wagner's music--perhaps symphony orchestras can perform his music in Israel now--and identifications with the Nazi regime. Or the case of Elia Kazan and the Communist scare in Hollywood: the art tainted by personal associations. I saw one blogger comment that we know Eric Gill never had remorse or a purpose of amendment, but I don't think we CAN know that!
Posted by Stephanie A. Mann at 2:00 AM