Another Review and a Review Article 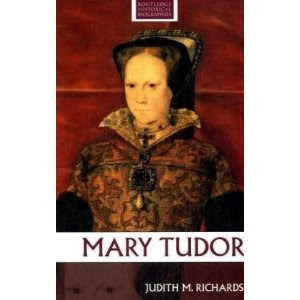 I reviewed Judith Richard's biography of Mary I in 2009 on Amazon.com:

As part of the Routledge Historical Biographies series, it is more academic in style with longer chapters and consideration of historiography:

At the beginning of this biography, Judith Richards describes the incredulity of friends and colleagues when told she was writing a new biography of Mary I, first Queen Regnant of England. She deals with the sources of that incredulity, that Mary was a bloody tyrant or that Mary was a boring monarch. Richards gives more attention to the latter than the former.

She covers Mary's birth and happy childhood, emphasizing the humanist education she received with the encouragement of both her mother and her father, Catherine of Aragon and Henry VIII. Then she recounts the suffering Mary endured as Henry dissolved his marriage to Catherine, sent her into exile, and married Anne Boleyn. Mary endured separation from her mother and bullying from her father's agents to force her to accept her own status as a royal bastard and deny any allegiance to the pope.

Richards creates sympathy for Mary in these situations, exploring not the emotions Mary "might" have felt in the style of so many biographers, but the documented evidence of her struggles to remain true to her mother and to her faith, especially when her half-brother Edward tried to force her to give up the Mass.

The nobles and the people of England rallied behind Mary when Edward died and Mary foiled Northumberland's plot to change the succession. Mary at first refused to have Lady Jane Gray executed--extraordinary clemency for a monarch, to let your usurper live (under arrest in the Tower, of course).

Richards dedicates six of the 12 chapters to Mary's five year reign, exploring how Mary handled working with councillors who had previously bullied her about the Mass or supported Northumberland; the pomp and majesty of her coronation patterned after the crowning and anointing of all the male monarchs who had gone before her, and analyzing the issues of her marriage and rule as sole monarch.

Richards does not dwell on the burnings at Smithfield and Oxford. She points out that we do not have a contemporary volume like Foxe's "Acts and Monuments" to describe the deaths of almost 200 Catholic priests and laity under Elizabeth I, and also hints that the campaign of burnings was having the desired effect.

She concludes this even-handed biography with the war with France, Mary's death, and a reassessment of her personality. B&W illustrations; good documentation. A model biography.

I also submitted a review essay to First Things, which appeared in their on-line blog November of 2009: "There's Something about Bloody Mary"--at that time I had perused the UK editions of both Porter's and Whitelock's biographies while at Blackwell's in Oxford. (You might notice the more tame title of Whitelock's book in the first edition--the U.S. version is much more dramatic!)
Posted by Stephanie A. Mann at 2:03 AM