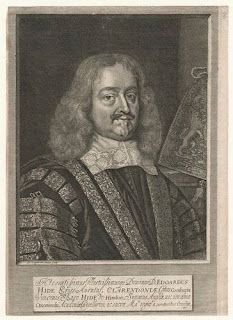 [Having posted so much on Mary I lately I will just say Happy Birthday to her today in passing (February 18, 1516), although I will talk about her on the Son Rise Morning Show, broadcasting on the EWTN Radio network this morning.]

Instead, let us consider Edward Hyde, the 1st Earl of Clarendon, born February 18, 1609. He was the father of Anne Hyde, whom the exiled James, the Duke of York married in less than favorable circumstances and thus the grandfather of James II's "ungrateful daughters" Mary (of William and Mary fame) and Anne.
A member of both the Short and Long Parliaments before the Civil War, he became a royalist serving as Chancellor of the Exchequer during the conflict and as guardian of the Prince of Wales. He began to write his History of the Rebellion and Civil Wars while Charles II was in Scotland defending his throne there, but rejoined the royal court in exile when Charles returned to France. He was named Lord Chancellor in 1658 and he served as King Charles II's Lord Chancellor after the Restoration of 1660.
While the Court was in exile, however, James seduced Clarendon's daughter Anne who was serving as Maid of Honour to Mary, the Princess Royal, so Charles forced his brother to marry her. Their first child, a boy, died soon after being born seven months after their wedding. James had not wanted to marry a commoner; Edward Hyde was named the Earl of Clarendon and Anne became the Duchess of York.
The Clarendon Code passed by the Restoration Parliament restored the Church of England. It included the Corporation Act, the Act of Uniformity, the Conventicle Act, and the Five Mile Act. This Parliament was not in the reconciling mood, as Winston Churchill commented in his history of the era: Puritans were out and Anglicans were in. Clarendon was opposed to Charles' policy of indulgence toward Roman Catholics.
Clarendon was impeached by the House of Commons in 1667 and went back to France in exile. There he continued to work on his history of the Civil War and died in December 1674--he is buried in Westminster Abbey. According to the 1911 Encyclopedia Britannica his great work, the History of the Rebellion and the Civil Wars

"is composed in the grand style. A characteristic feature is the wonderful series of well-known portraits, drawn with great skill and liveliness and especially praised by Evelyn and by Macaulay. The long digressions, the lengthy sentences, and the numerous parentheses do not accord with modern taste and usage, but it may be observed that these often follow more closely the natural involutions of the thought, and express the argument more clearly, than the short disconnected sentences, now generally employed, while in rhythm and dignity Clarendon's style is immeasurably superior. The composition, however, of the work as a whole is totally wanting in proportion, and the book is overloaded with state papers, misplaced and tedious in the narrative. . . . In general, Clarendon, like many of his contemporaries, failed signally to comprehend the real issues and principles at stake in the great struggle, laying far too much stress on personalities and never understanding the real aims and motives of the Presbyterian party."

His eldest son Henry succeeded him as the 2nd Earl of Clarendon while his younger son Laurence was the lst Earl of Rochester. The former refused to support William and Mary as king and queen in 1689 and was imprisoned as a Jacobite; the latter was at first opposed to their rule but swore the Oaths of Allegiance.
Posted by Stephanie A. Mann at 2:02 AM