Edward VII and the Catholic Church 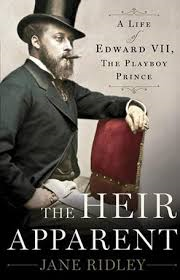 My frequent correspondent Edward Short, whose books about Newman and abortion I have reviewed on my blog and elsewhere, reviewed The Heir Apparent: A Life of Edward VII, the Playboy Prince for The Weekly Standard. In it, he comments:

One corollary of Bertie’s continental savoir-faire was his marked distaste for many of his compatriots’ prejudices, especially their anti-Semitism and anti-Catholicism. At the same time, he was adamant about respecting the different traditions of his subjects: When his first sea lord, Admiral Fisher, marveled at his concern for the health of the socialist firebrand Keir Hardie, Bertie responded, “You don’t understand me. I am the King of all the people.”

Edward VII, according to some other sources, had several Catholic and Jewish friends, and demonstrated both some interest in Catholicism and some good common sense about Anglican-Catholic relations. He attended a Requiem Mass for the King of Portugal, Carlos I, after his assassination in 1908, at the Portuguese Embassy Chapel. The Archbishop of Westminster, Francis Bourne, seated the King and Queen Alexandra rather prominently in the chapel and the Protestant Alliance said that Edward VII had violated his coronation oath to the Defender of the (Protestant) Faith.

Both The Telegraph and The Catholic Herald published stories in the lead up to Pope Benedict XVI's state visit to Scotland and England about Edward VII even being received into the Catholic Church of his deathbed, like Charles II. From The Telegraph:

Edward was known for his Catholic sympathies. He had tried to change the Coronation service to keep out anti-Catholic remarks. As Prince of Wales, he had visited Pope Pius IX three times. When guests at Marlborough House were unwell, Fr Forster would bring the Sacrament to them, and the Prince would meet him at the door, conducting him upstairs with lighted tapers to the sick-room.

More detail from The Catholic Herald:

What about King Edward VII? We certainly know that he had strong Catholic sympathies. He expressed his detestation of the Protestant declaration in the coronation service, involving an oath against Transubstantiation. He was a champion of Catholic equality and attended many Masses, where it is reported that “he would stand in the sanctuary following every detail, missal in hand, with attention, veneration, and respect”. Moreover, he had no particular friends among the Anglican bishops, but was a close friend of the famous Catholic preacher Fr Bernard Vaughan SJ; also, of Henry Duke of Norfolk, and of such as the Abbot of Tepl and the Marquess de Soverall.

As Prince of Wales he visited Pope Pius IX three times and later became the first English king since the Plantagenets to cross the threshold of the papal palace in Rome to visit Leo XIII. He gave money for the upkeep of at least one Catholic church and the last big religious function he attended was the Blessed Sacrament procession at Lourdes, where he entered the grotto and apparently prayed at La Roque church. . . .

Well, Paul Cambon, the French ambassador at the time of the King’s death, was summoned by Queen Alexandra to pay a final friendly visit to the King as he lay dying, and noticed a Catholic priest leaving his bedside. According to Gerard Noel, the former editor of The Catholic Herald, Cambon noted in his memoirs that he knew the priest by sight, but not by name.

There is evidence that the priest may have been Fr Forster himself. A member of the same family, Dr Lavinia Braun-Davenport, has stated that in her family tradition she was “brought up with the knowledge that my grandmother’s great uncle, Fr Cyril Forster, had converted the King of England to Catholicism on his deathbed”. The king was Edward VII. The suggestion is that Fr Forster was taken by Sir Ernest Cassel, a close friend of the King and a Catholic convert himself (from Judaism), to see the sovereign as he lay dying. It is claimed that Edward there accepted the Catholic faith. There seems to be no doubt that Fr Forster was one of the King’s visitors on his last day. Dr Braun-Davenport’s grandmother left a note saying that Edward’s conversion was “a ‘family secret’ – the Old Rake’s Repentance”!