Yet Another Historical Novel: "The Spanish Match" 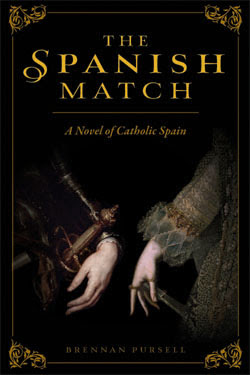 Sophia Institute Press announces a new historical novel, The Spanish Match, telling the story of the proposed marriage between Charles, James I's son and heir, and the Infanta of Spain:

Murder, mayhem, and religion fustrate the royal courtship that, through love, seeks to make peace between warring enemies England and Spain:
A novel based on actual events.

In 1623 Charles, heir to the throne of England, dons a disguise, crosses the Channel, rides horseback across France, and sneaks into Madrid, capital of England’s proud Catholic enemy, Spain.

His mission? To woo the lovely María, sister of the King of Spain, and accomplish by marriage what decades of war have failed to do: reconcile the two embittered nations.

Once Charles and María meet, neither palace intrigues nor bloody murders cool their growing attraction. One thing alone prevents their union: María’s Catholic Faith . . . which she will not abandon and England cannot abide.

Yes, Charles’s marriage to Catholic María would briefy unite the kingdoms, but could soon destroy the monarchy. Outraged at the prospect of a Catholic queen, Charles’s Puritan subjects are sure to rise up and take from him not only his throne, but even his life . . . and María’s . . . plunging Europe into warfare greater than any seen before.

From detailed records of this actual love’s gambit author Brennan Pursell has crafted a moving novel of faith, courage, danger, and hope, a tale in which the fate of nations hangs on the love of two young people: Prince Charles of England and Princess María of Spain.

Here is an interview with the author and here is an excerpt from novel.

There is a connection for the Sunday Shrine series--the Queen's Chapel at the Palace/Court of St. James, originally built for the use of the Infanta, but then used by Henrietta Maria, Charles I's French Queen. It was designed by Inigo Jones, but Henrietta Maria supervised some Baroque decoration. Diane Purkiss discusses the Catholic Reformation motives behind these improvements in her book, The English Civil War: Papists, Gentlewomen, Soldiers, and Witchfinders in the Birth of Modern Britain starting on page 30 in this preview from Google Books.
Posted by Stephanie A. Mann at 2:12 AM