St. Gilbert of Sempringham and the Gilbertines 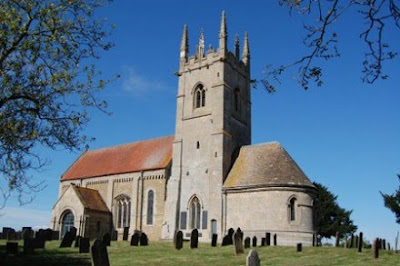 Last year, the UK Catholic Herald featured this saint, "who founded the only distinctively English medieval religious order" in the Twelfth Century in his native Lincolnshire. The article details his path to becoming leader of this order and notes:
"Though the Gilbertines were never richly endowed they continued to flourish until the Reformation. The order, however, died out after being dissolved by Henry VIII. Today it is difficult to find even the church at Sempringham, while virtually nothing remains of the monastic buildings which had once housed 200 nuns." At the time of the Dissolution there were 26 houses, but only four major monasteries. All were handed over to the king without any trouble, and the last prior of Sempringham Abbey, Robert Holgate, became Archbishop of York in 1545, succeeding Edward Lee, whom Henry VIII appointed after the death of Thomas Wolsey.
St. Gilbertine was arrested and imprisoned in 1165, suspected of aiding St. Thomas a Becket as the latter fled from Henry II after the Council at Northampton. He was eventually released. As Alban Butler more poetically states, "During the exile of St. Thomas of Canterbury, he and the other superiors of his Order were accused of having sent him succors abroad. The charge was false; yet the saint chose rather to suffer imprisonment and the danger of the suppression of his Order, than to deny it, lest he should seem to condemn what would have been good and just."

This site discusses the renewal of Gilbertine Spirituality. The photo above, from the Catholic Herald, is of The Abbey Church of St Andrew, Sempringham. This site provides even more detail about the history of the order.
Finally, this site describes the revival of a priory at Chicksands (where St. Thomas a Becket did stop on his way to Pontigny!).

Email ThisBlogThis!Share to TwitterShare to FacebookShare to Pinterest
Labels: dissolution of the monasteries, Gilbertine Spirituality, Monasticism in England, St. Gilbert of Sempringham, St. Thomas a Becket