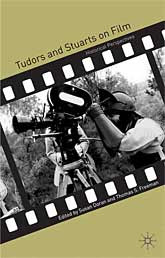 This book is edited by Susan Doran and Thomas S. Freeman. From the publisher: Film can be an invaluable teaching resource. Tudors and Stuarts on Film provides analyses of films about the Tudor and Stuart period from leading historians. The accuracy of each film is assessed, and they are also placed within the context of the period in which they were made, and the influence they have had on popular conceptions of early modern England.

1. Introduction: It's Only a Movie--T.Freeman & S.Doran
2. A Tyrant for All Seasons: Henry VIII on Film--T.Freeman
3. Saints and Cinemas: A Man for All Seasons--P.Marshall
4. Anne of a Thousand Days--G. Richardson
5. Lady Jane Grey on Film--C.Levin
6. From Hatfield to Hollywood: Elizabeth I on Film--S.Doran
7. Ladies in Waiting: Young Elizabeth Tudor on Film--J.Richards
8. Kapur's Elizabeth--C.Haigh
9. Mary Queen of Scots (1971)--J.Guy
10. The Armada, War and Propaganda in the Cinema--W.Coster
11. Elizabeth: The Golden Age: A Sign of the Times?--V. Westbrook
12. Shakespeare in Love: Elizabeth I as dea ex machina--B.Usher
13. The Private Lives of Elizabeth and Essex and the Romanticization of Eliabethan Politics--P.Hammer
14. Oliver Cromwell and the Civil Wars--J.Morrill
15. The Unfilmed Oliver Cromwell--D.Smith
16. Winstanley--C.Durston
17. Why Don't the Stuarts Get Filmed?--R.Hutton

You might notice immediately that Mary, the First Queen Regnant of England isn't even mentioned in a chapter title, although she does show up on the chapters on the Tudors; only one of Henry's wives has merited a chapter. Of course, this because of Hollywood's (standing for all film production) choices of whose story works on film. Perhaps it's a good thing Mary I has not been portrayed extensively on film--those fires of Smithfield! Elizabeth I dominates: eight of the chapters, including the chapter on her cousin Mary, Queen of Scotland and her 1971 movie, discuss the presentation of the last Tudor monarch on screen.

What these distinguished authors have done is not only analyze the historical accuracy of the films (and they all take certain liberties with the facts) but explore the reasons for the film makers' choices. Perhaps the best two chapters for this analysis are the two on the Shekar Kapur Elizabeth films. The anti-Catholic, really misogynist views the director and his screenwriter have taken of her reign are really disturbing, totally anti-feminine, twisting facts, playing with the timeline and creating plots and events that really don't fit with the history we know. Now, there's that disclaimer in the introduction, "it's only a movie" but the film makers, including the actors, are presenting their film as "a" truth, a plausible, dramatic, and effective presentation to move the audience: move them to think or feel something about events in the past. From these two movies the audience will certainly think that all Catholics in sixteenth century England were treasonous villains, ready to murder, but not really ready to suffer (Westbrook comments that "the torture sequences were hardly shocking. Apparently, Catholics were prepared to give it all up for a few pokes with a torch and the loss of body hair"!) We certainly know that's not true--at least the Catholic priests like St. Edmund Campion, St. Alexander Briant, St. Robert Southwell, and St. Henry Walpole, to name just a few, suffered the most excruciating and unrelenting torture Topcliffe and Elizabeth's other torturers could devise and deliver!
The last chapter, on the Stuarts, is really a gem in the book. Ronald Hutton immediately admits that his chapter title is completely misleading, because the Stuarts have been filmed, of course. He says the real title should be two questions, "Why don't the Stuarts get filmed as often as the Tudors?" and "Why don't the Stuarts get filmed memorably?" In answering those questions, he introduced me to a film I've never heard of but would love to see, The Exile, with Douglas Fairbanks, Jr. Hutton also mentioned Forever Amber with Linda Darnell (I remember finding my mother's copy of that "scandalous" novel, printed in double columns to save paper during WWII, hidden in the front closet and reading all about the plague!) TCM has the fun note that The Exile was released in sepia tone and came out at the same time as Forever Amber so that it was nicknamed "Forever Dark Brown"!
I read this book primarily because I am preparing a presentation series for the Eighth Day Institute here in Wichita, Kansas. I want to examine the changes in how the history of the E 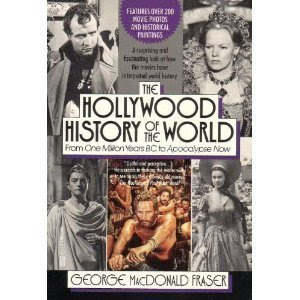 nglish Reformation has been presented, from the Whig interpretations to the revisionist views I summarize in Supremacy and Survival: How Catholics Endured the English Reformation. I plan to use a historical novel, By What Authority? by Robert Hugh Benson to represent a Catholic interpretation and a movie, Fire Over England by Alexander Korda to represent a nationalistic, Whig view--both focused on the reign of Elizabeth I.

Beyond that purpose, for which the chapter on "The Armada, War and Propaganda in the Cinema" was most useful to me, I thoroughly enjoyed this book. It satisfies my love of history, truth, and great movies, especially movies from the great days of Hollywood. The other book (perhaps a guilty pleasure?) that satisfies those interests is George MacDonald Fraser's The Hollywood History of the World From One Million Years B.C. to Apocalypse Now! Fraser was a real fan of Charlton Heston, I recall. He also highlighted one movie in particular which I've seen at least once on TCM: Saraband for Dead Lovers, with Stewart Granger and Joan Greenwood, who must have had the most distinctive voice of any actress in her era. I can never decide which performance of hers I enjoy more: in Kind Hearts and Coronets or The Importance of Being Earnest.
Posted by Stephanie A. Mann at 2:17 AM