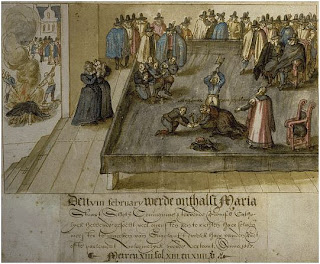 Soon we will consider the executions of Lady Jane Grey and her husband Guilford at the orders of Mary I of England during the crisis of the Wyatt Rebellion. As I read different on-line accounts on their deaths, I certainly noticed the effects of their mythology and legend--with comments about Mary's panic and cruelty in ordering their deaths. Yet she had delayed those orders and had really intended that they be freed at some point. Jane's father participated in Wyatt's rebellion--Mary had forgiven him once and she had not ordered their executions in November of 1553, even though they pled guilty. Yet, their executions are used to further bloody Mary.
If those minor legends hold such sway, the legend--and the real impact--of Mary, Queen of Scots' execution on February 8, 1587 at Fotheringhay Castle looms tremendously over our imaginations and reactions. I admit that my knowledge of Mary is formed by Antonia Fraser's 1969 biography. The epilogue still has great impact when Fraser writes about all the childrens' coffins found when the vault was opened and the fact that all the kings and queens of England after the Tudors were and are her descendants--in contrast to the barrenness of Elizabeth and Mary of England; and the summary with Mary's motto: In My End is My Beginning--Fraser really wraps it up!
Like her half-sister Mary regarding Lady Jane Grey, Elizabeth also regretted the deposed Queen of Scotland's execution--especially since Mary of Scotland had been anointed and crowned. For one anointed and crowned Queen to say that another anointed and crowned Queen could be executed was a bad precedent--one that Mary of Scotland's grandson would inherit. Elizabeth also knew that this death would have a wide-ranging impact, as Mary herself had pointed out--the reactions of France and Spain [Armada, anyone?] had to be considered. The manifest unfairness of the trial, as Mary was without legal counsel, could call no witnesses, did not see the evidence to be presented against her, and had never been a subject of Queen Elizabeth (a prisoner, yes, but how can an anointed and crowned Queen be a subject?) and thus could not be accused of treason--and then there was the whole issue of entrapment! Please note that the same injustices in the conduct of Charles Ist's trial are levied against Cromwell and his Rump Parliament--no legal counsel, no knowledge of the charges beforehand--and the same dilemma of the authority of the court over the king!
And then the theatrics of the execution: her weeping attendants, Mary's pointed references to martyrdom and her Catholicism, the reports of her head falling out of its wig in the executioner's hand and the piteous image of her little terrier on the scaffold! A public relations nightmare for Elizabeth!
But Elizabeth had signed the death warrant and although she had the privy councillor who enacted it (William Davison) thrown in the Tower, he was eventually freed. Philip II of Spain and the other Catholic courts on the Continent reacted just as Mary had predicted.
Posted by Stephanie A. Mann at 2:08 AM