Remember the Blaine! Amendment, That Is

PLEASE NOTE: I will be on the Son Rise Morning Show Monday Morning, February 13 at 7:45 a.m. Eastern; 6:45 a.m. Central to discuss the connections commentators are seeing between the HHS Mandate and what I call the "Tudor Mandates" (Henry VIII's Act of Supremacy and Elizabeth I's Acts of Supremacy and Uniformity). Listen live here. 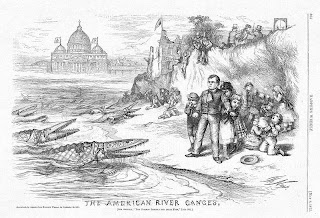 This September 27, 2004 article from America magazine even has an appropriate title for our current situation in the USA: "A Mandate for Anti-Catholicism: The Blaine Amendment". The issue now is health care; the issue in the 1870s was public education. (Of course, the underlying issue was and is freedom of religion.) Thomas E. Buckley provides an excellent survey of post-Civil War America, facing issues of unity and diversity:

The advancement of public schools represented a key element in that program as well as an important part of the Republican drive for cultural homogeneity in post-Civil War America. The schools would lift up Southern blacks and Americanize newly arrived immigrants, especially Irish and German Catholics. Following the program laid out by Horace Mann in the 1840’s, public education would inculcate a nondenominational Protestant morality through Bible reading, hymn singing and the use of the McGuffey readers. The result would be a law-abiding, hard-working, broadly based middle-class society that embodied the values of capitalism embedded in Republican ideology.

Some Republican politicians, like President Ulysses S. Grant, James Gillespie Blaine, Judge Elisha Hurlbut of New York, and future President Rutherford B. Hayes began to believe that the Catholic Church and Catholic schools stood in the way of those goals. Thus they began to use language much like Queen Victoria's government, headed by Lord John Russell did when after Catholic Emancipation in 1829, the Catholic Church re-established a hierarchy in 1850.

It would empower Congress to ban “any foreign hierarchical power...founded on principles or dogmas antagonistic to republican institutions.” Some read in Hurlbut’s proposal the opening salvo of an anti-Catholic, nationalistic campaign akin to Otto von Bismarck’s Kulturkampf, which was gathering steam in Germany. Moreover, the campaign to identify the United States as a Christian Protestant nation, which had begun during the Civil War, now revived with the efforts of Supreme Court Justice William Strong and the National Reform Association to amend the U.S. Constitution’s preamble to read: “Recognizing Almighty God as the source of all authority and power in civil government, and...the Lord Jesus Christ as the Governor among the nations, His revealed will as the supreme law of the land, in order to constitute a Christian government,” we the People, etc.

President Grant concurred with these sentiments and Blaine followed up on them:

the president proposed that Congress approve a constitutional amendment formally separating church and state, provide for the taxation of church property and forbid the states from allocating public funds to any schools that taught “sectarian tenets.” Sectarian meant Catholic. A week later Blaine offered his amendment on the floor of the House. It included the most popular of the Grant proposals. After extending the language of the First Amendment to the states, it provided that “no money raised by taxation in any state for the support of public schools, or derived from any public fund thereof, nor any public lands devoted thereto, shall ever be under the control of any religious sect, nor shall any money so raised or lands so devoted be divided between religious sects or denominations.”

Although the amendment passed overwhelmingly in the House of Representatives, it failed to achieve the two-thirds majority necessary in the Senate. Nevertheless, state legislatures began to adopt Blaine amendment type clauses in their constitutions. Meir Katz of The Beckett Fund provides detail about them in this report.

Again, I am not drawing absolute comparisons between the USA in the nineteenth century and today. This history, like the conflicts between the Catholic Church and Queen Victoria's government in nineteenth century England, represents another phase in the ongoing "dialogue" between Church and State. I don't think anyone in the executive or legislative branches of our government is speaking this kind of language, but you can clearly see, if you read even a few comments on any news website covering or commenting on the HHS Mandate, the old nativist anti-Catholic attacks. Unfortunately, they are now combined with mentions of the priest sex-abuse crisis of the last decade.
Posted by Stephanie A. Mann at 2:17 AM