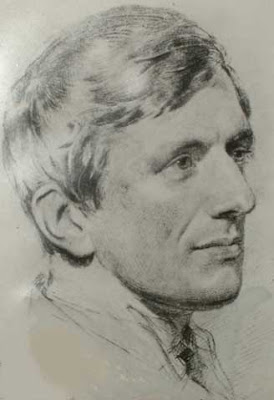 From the Parochial and Plain Sermons, "The Duty of Self Denial":

Self-denial, then, is a subject never out of place in Christian teaching; still more appropriate is it at a time like this, when we have entered upon the forty days of Lent, the season of the year set apart for fasting and humiliation. {87}

This indeed is not all that is meant by self-denial; but before proceeding with the subject, I would ask whether the generality of mankind go as far as this: it is plain that they do not. They do not go so far as to realize to themselves that religious obedience involves a thwarting of those wishes and inclinations which are natural to them. They do not like to be convinced, much less will they act upon the notion, that religion is difficult. You may hear men of the world say plainly, and as if in the way of argument, "that God will not punish us for indulging the passions with which we are born; that it is no praise to be unnatural; and no crime to be a man." This, however, may seem an extreme case; yet are there not a great many decent and respectable men, as far as outward character goes, who at least fix their thoughts on worldly comfort, as the greatest of goods, and who labour to place themselves in easy circumstances, under the notion that, when they can retire from the business of their temporal calling, then they may (in a quiet, unexceptionable way of course) consult their own tastes and likings, take their pleasure, and indulge themselves in self-importance and self-satisfaction, in the enjoyment of wealth, power, distinction, popularity, and credit? I am not at this moment asking whether such indulgences are in themselves allowable or not, but whether the life which centres in them does not imply the absence of any very deep views of sanctification as a process, a change, a painful toil, of {88} working out our own salvation with fear and trembling, of preparing to meet our God, and waiting for the judgment? You may go into mixed society; you will hear men conversing on their friend's prospects, openings in trade, or realized wealth, on his advantageous situation, the pleasant connexions he has formed, the land he has purchased, the house he has built; then they amuse themselves with conjecturing what this or that man's property may be, where he lost, where he gained, his shrewdness, or his rashness, or his good fortune in this or that speculation. Observe, I do not say that such conversation is wrong; I do not say that we must always have on our lips the very thoughts which are deepest in our hearts, or that it is safe to judge of individuals by such speeches; but when this sort of conversation is the customary standard conversation of the world, and when a line of conduct answering to it is the prevalent conduct of the world (and this is the case), is it not a grave question for each of us, as living in the world, to ask himself what abiding notion we have of the necessity of self-denial, and how far we are clear of the danger of resembling that evil generation which "ate and drank, which married wives, and were given in marriage, which bought and sold, planted, and builded, till it rained fire and brimstone from heaven, and destroyed them all?" [Luke xvii. 27-29.]

It is strange, indeed, how far this same forgetfulness {89} and transgression of the duty of self-denial at present spreads. Take another class of persons, very different from those just mentioned, men who profess much love for religion—I mean such as maintain, that if a man has faith he will have works without his trouble, so that he need be at no pains about performing them. Such persons at best seem to say, that religious obedience is to follow as a matter of course, an easy work, or rather a necessary consequence, from having some strong urgent motive, or from some bright vision of the Truth acting on the mind; and thus they dismiss from their religion the notion of self-denial, or the effort and warfare of faith against our corrupt natural will, whether they actually own that they dismiss it or not. I say that they do this at best; for it often happens, as I just now intimated, that they actually avow their belief that faith is all-sufficient, and do not let their minds dwell at all on the necessity of works of righteousness. All this being considered, surely I am not wrong in saying that the notion of self-denial as a distinct religious duty, and, much more (as it may well be called), the essence of religious obedience, is not admitted into the minds of the generality of men.

Read the rest here.
Posted by Stephanie A. Mann at 2:58 AM