Some Great Info on the Medieval Franciscans at Oxford 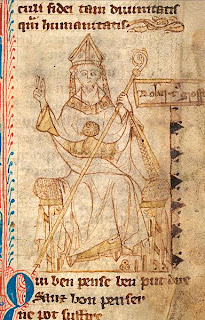 From Once I Was a Clever Boy comes this great post on the Franciscans at the University of Oxford during the middle ages:

An early morning meeting at Christ Church last Friday took me on a slightly different route into the centre of Oxford and through the site of the medieval Oxford Greyfriars.

The buildings had been largely demolished by the time Ralph Agas drew his pictorial map of the city in 1578, but excavations in 1971 and 1972 revealed the plan of the church and some of the conventual buildings - the foundations had been largely robbed out. The church had a very unusual extended north transept to accommodate more altars, and was cut into the city wall. Part of the site of the choir is still visible as a grass plot in Old Greyfriars Street, whilst the multi-storey car to the south covers the site of the domestic ranges.

The founding Prior, Bl. Agnellus of Pisa, is buried there. The house, along with the whole Franciscan mission in England, attracted the support of the diocesan bishop, Robert Grosseteste, who held the see of Lincoln from 1235 until his death in 1253. The Oxford friary had his library and relics such as his sanctuary slippers until the dissolution. I strongly suspect that "my bishop" Richard Fleming used the library in his own time as a student and Regent Master in Oxford. Grosseteste's close friend Adam Marsh was trained and lectured at the friary.

Of course, all those great foundations, including the library, were destroyed during the Dissolution of the Monasteries. More here from the Greyfriars Centre for Franciscan Studies in Oxford:

The old Greyfriars began as a Hall of the University of Oxford. It may not have been among the grandest and most well-known, but it was one of its kind, a true gem, with a meaningful story and a lesson to impart, a place the ethos of which was precisely what Oxford has always stood for. The Hall was first founded in 1230 and its first Principal Lecturer, Robert Grosseteste, became Chancellor of the University. Among its former fellows and students were Roger Bacon, Duns Scotus, William of Occam and Pope Alexander V.

Not many people know that, at the beginning of the 13th century, with Grosseteste’s collection bequeathed to the Franciscans in Oxford, Greyfriars was one of the first libraries in the University. In 1290 the college acquired another substantial collection, that of commentaries on the Bible. The bulk of Grosseteste's books are documented to have been still in place in 1317. By that time, the Franciscans had two libraries at Oxford, one for the friars, the other specifically for the students, the latter considered the finest in the University at that time. Tragically, these unique libraries are now lost. In 1538, when Henry VIII dissolved the monasteries, the Hall was disbanded and with it, all the priceless books and manuscripts were scattered. Nobody knows where. Small chance of ever finding any of them again.

Many centuries later, the Franciscans came back to Oxofrd, establishing Greyfrirars friary which, in 1957, was granted a licence to become a Permanent Private Hall. This was possible due the relentless energy of amazing scholarly friars. They and the help conferred by very generous and important bequests put Greyfriars back on the map of Oxford University where it belonged. The status of Permanent Private Hall conferred upon Greyfriars by the University in 1957 was surrendered in 2008.
Posted by Stephanie A. Mann at 2:19 AM