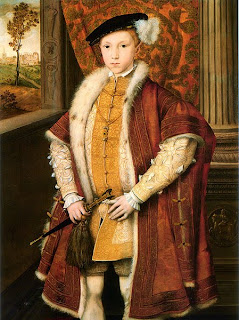 Henry VIII was buried in the chapel at Windsor Castle in the same tomb as his son's mother, Jane Seymour, on February 16, 1547. On February 20, 1547, his son was crowned King Edward VI of England and Ireland at Westminster Abbey.

Because of his youth, the coronation ceremony was shortened. Also many of the traditions of the coronation ceremony were related to Catholicism, and this reign was to be dedicated to the continued Reformation of the Church of England. Archbishop of Canterbury Thomas Cranmer called on the young king to be a second Josiah and to make sure that "the tyranny of the Bishops of Rome [be] banished from your subjects, and images removed". Josiah was a King of Judah who came to the throne as a young boy like Edward. The high priest Hilkiah found the Torah and Josiah returned Judah to the worship of YHWH, destroying the idols in the Temple. Josiah reigned for 31 years, so Cranmer hoped for a long reign.

Biographies of Edward VI and studies of his brief, minority reign are usually more about Lord Protector Somerset, Edward's uncle Edward Seymour; the plots of his other uncle, the Lord Admiral Thomas Seymour; the Prayer Book revolt and Kett's rebellion; the conflict between Edward and his half-sister Mary over her dedication to the Catholic Mass; Edward's last, horrible illness, and the plan to place Lady Jane Grey on the throne, with the efforts of John Dudley, the Duke of Northumberland leading the cause.

The most recent biography Edward VI: The Lost King of England by Chris Skidmore notes that although this young boy's new reign--like Henry VIII's after his father's death--was to be a new beginning, freedom from tyranny, freshness of ideas, instead it became a "time of intrigue, deceit, plotting and treason, very nearly plunging the country into civil war." After reading that introduction, in which Skidmore hints at greater revelations of how Edward's personality and precociousness are reflected in his voluminous writings, I was rather disappointed in the rest of the book. Because, of course, it is the adults who take all the actions; Edward might reflect, take notes, and make comments, but he did not have the opportunity to rule. He was on the cusp of maturity when he died, just as he was starting to sign documents and review matters with greater maturity. Trying to predict what a great King Regnant he might have made is still next to impossible.

I really appreciated Diarmaid McCullough's study of Edward VI's reign: The Boy King: Edward VI and the Protestant Reformation. I think it is a more secure study of the Calvinist theology and worship developing during Edward's reign and his interest in it.