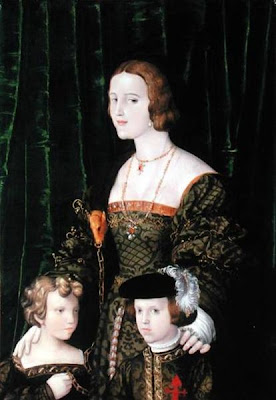 He was heir of three great lineages--the Hapsburg (thus the jaw); Valois-Burgundy, and Trastamara (Aragon and Castile). His full title was:

Obviously, he was multi-lingual: "I speak Spanish to God, Italian to women, French to men and German to my horse," he said, according to the Wikipedia article on-line(!).

His mother was Katherine of Aragon's sister Joanna (pictured with him above) who married Philip the Handsome, son of Maximilian I, HRE. Thus, he was Katharine of Aragon's nephew and her daughter Mary's cousin. When Henry VIII and Charles V were allies against France, the cousins were to be married. Since the balance of power shifted when Francois I was captured at the Battle of Pavia, Charles didn't need alliance with Henry and those plans fell through. When Henry VIII planned to have his marriage to Katherine annulled, Charles supported her particularly in her appeals to the Holy See; and when Edward VI tried to force Mary to give up the Catholic Mass and conform to the new Book of Common Prayer services, Charles supported her, too--although he had counseled her to take the oaths Henry VIII demanded before she could be reunited with her father. That event seems to have shaken Mary to her core and she certainly redicated herself to being true to her mother's Church if not to her mother. It was Charles's suggestion that she marry his son Philip.

Many years ago (2000), I visited Mechelen, home of Charles V's regent and guardian, Margaret of Austria. I toured a great exhibition of allegorical tapestries called "Los Honores", presented during the celebration of the 500th anniversary of his birth.

While in Mechelen, of course, I also honored Charles V by imbibing a Gouden Carolus, Mechelen's favorite son's eponymous beer, seated at a cafe in view of St. Rumboud's Cathedral and the statue of Margaret of Austria in the town square.

After years of wars and travel, gout caught up with Charles and he abdicated on October 25, 1555, retiring to the monastery of Yuste. At the end of Verdi's Don Carlos, based on Schiller's play, he appears outside his tomb at Yuste as a ghostly Monk to save his grandson from the Inquisitor! Years after his death there in 1558 he was buried in the Pantheon of the Kings in the Monastery at El Escorial.
Posted by Stephanie A. Mann at 2:17 AM