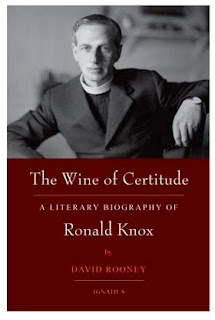 Ronald Knox's conversion to Catholicism shocked the Anglican community. After all, his father was the Bishop of Manchester, an evangelical Anglican! He was born on this day in 1888. He became a Catholic in 1917, a Catholic priest in 1919 and died on August 24, 1957.

David Rooney, author of a recent biography, The Wine of Certitude: A Literary Biography of Ronald Knox, places Knox in the context of other defections from the Church of England:
The English Catholic literary revival had already been thriving for almost three-quarters of a century when Ronald Knox, fourth son of the Anglican Bishop of Manchester, was received into the Roman communion on September 22, 1917. It had begun with the conversions of the clergymen John Henry Newman and Henry Edward Manning, both later to become cardinals, and the layman William George Ward, whose son and granddaughter would carry on the apostolate of the pen, the former through books and essays, and the latter primarily as cofounder with her husband of the most famous Catholic publishing house of the twentieth century.
In the early 1900s, that world of letters was the domain of Hilaire Belloc and G.K. Chesterton (though Chesterton's formal entry into the Church wouldn't come until 1922), and of the prolific but short-lived novelist Robert Hugh Benson, himself the convert son of an Archbishop of Canterbury. It was a world in which many well-educated men and women had come to see the Church of England as insufficiently countercultural in the face of materialism, agnosticism, and alternating moods of self-pride and despair, and who then saw in Rome a constancy and a consistency betokening a sure guide to the meaning of the Gospel message. There were converts among scientists, among historians, among novelists, even among actors, and the impression they produced, especially during the decades of Knox's prominence (the 1910s through the 1950s) was fortifying to those already in the Church, encouraging to those thinking about conversion, and vaguely alarming to those who retained the prejudice against Rome so thoroughly inbred in the nominally tolerant, vestigially Protestant culture that dominated the printed and spoken media.
Knox completed Blessed John Henry Newman's planned translation of the Jerome Vulgate into English in 1945 (New Testament) and 1950 (Old Testament). Serving as a chaplain to Catholic students at the University of Cambridge, Knox wrote apologetic and catechetical works such as The Hidden Stream and The Belief of Catholics. My favorite is his collection of homilies about saints, including several English martyrs, Captive Flames.
Ignatius Insight has a page dedicated to his life and works. There is a Ronald Knox Society of North America. I enjoyed both Evelyn Waugh's biography and Penelope Fitzgerald's study of her father and three uncles in The Knox Brothers. She was the daughter of Edmund Knox, the editor of Punch and the niece of cryptographer Alfred Knox, Bible scholar and Anglican monk Wilfred Knox, as well as Ronald Knox.
Posted by Stephanie A. Mann at 2:10 AM