Unintended Consequences? The Reformation and Today 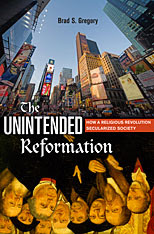 I enjoyed reading Brad Gregory's Salvation at Stake, his study of the state of Christian martyrdom in 16th century Europe. His most recent book is The Unintended Reformation: How a Religious Revolution Secularized Society:

In a work that is as much about the present as the past, Brad Gregory identifies the unintended consequences of the Protestant Reformation and traces the way it shaped the modern condition over the course of the following five centuries. A hyperpluralism of religious and secular beliefs, an absence of any substantive common good, the triumph of capitalism and its driver, consumerism—all these, Gregory argues, were long-term effects of a movement that marked the end of more than a millennium during which Christianity provided a framework for shared intellectual, social, and moral life in the West.

Before the Protestant Reformation, Western Christianity was an institutionalized worldview laden with expectations of security for earthly societies and hopes of eternal salvation for individuals. The Reformation’s protagonists sought to advance the realization of this vision, not disrupt it. But a complex web of rejections, retentions, and transformations of medieval Christianity gradually replaced the religious fabric that bound societies together in the West. Today, what we are left with are fragments: intellectual disagreements that splinter into ever finer fractals of specialized discourse; a notion that modern science—as the source of all truth—necessarily undermines religious belief; a pervasive resort to a therapeutic vision of religion; a set of smuggled moral values with which we try to fertilize a sterile liberalism; and the institutionalized assumption that only secular universities can pursue knowledge.

The Unintended Reformation asks what propelled the West into this trajectory of pluralism and polarization, and finds answers deep in our medieval Christian past.

Barton Swaim, author of Scottish Men of Letters and the New Public Sphere, 1802-34, reviewed it for The Wall Street Journal: "Blame It on Calvin and Luther"--

Brad Gregory, a history professor at Notre Dame, is deeply unhappy with modern life. "I wish this book could have had a happier ending," he says late in "The Unintended Reformation," an intellectual history of the West since the religious upheaval of the 16th century, "but that would have happened only if the world in which we are living today were different. And our present world would be different only if the past had not been what it was."

Mr. Gregory describes six ways in which the West has lost its moral and intellectual bearings, and in each case he traces the loss to the Protestant Reformation, when Martin Luther, John Calvin and others led a rebellion against what they perceived to be the Roman Catholic Church's corruption and theological error.

The book begins with a broadside against "supercessionist" views of history: narratives in which supposedly primitive ideas give way to progressively more sophisticated ideas, culminating in those of the enlightened present. The sophisticated ideas of the present, Mr. Gregory notes, always seem to bear a striking similarity to those of the historian and his or her like-minded colleagues in the faculty lounge. The problem with supercessionist histories is that the overwhelming majority of Westerners, unlike most historians, are not disenchanted, secularist intellectuals, and any serious interpretations of history claiming to explain how we got to the present day must also describe the present as it actually is—not as the historian thinks it should be or soon will be. . . .

Read the rest of the review here. Something new for the wish list?
Posted by Stephanie A. Mann at 2:16 AM