St. Claude at the Court of St. James 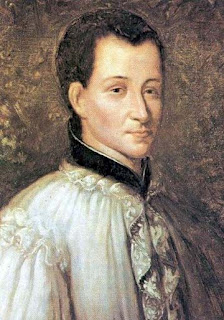 St. Claude de la Colombiere, SJ died on February 15, 1682. In a way, he is a victim of the Popish Plot, according to this biography published on the Vatican website:

After a year and half in Paray, in 1676 Father La Colombière left for London. He had been appointed preacher to the Duchess of York - a very difficult and delicate assignment because of the conditions prevailing in England at the time. He took up residence in St. James Palace in October.

In addition to sermons in the palace chapel and unremitting spiritual direction both oral and written, Claude dedicated his time to giving thorough instruction to the many who sought reconciliation with the Church they had abandoned. And even if there were great dangers, he had the consolation of seeing many reconciled to it, so that after a year he said: "I could write a book about the mercy of God I've seen Him exercise since I arrived here!"

The intense pace of his work and the poor climate combined to undermine his health, and evidence of a serious pulmonary disease began to appear. Claude, however, made no changes in his work or life style.

Of a sudden, at the end of 1678, he was calumniously accused and arrested in connection with the Titus Oates "papist plot". After two days he was transferred to the severe King's Bench Prison where he remained for three weeks in extremely poor conditions until his expulsion from England by royal decree. This suffering further weakened Claude's health which, with ups and downs, deteriorated rapidly on his return to France.

During the summer of 1681 he returned to Paray, in very poor condition. On 15th February 1682, the first Sunday of Lent, towards evening Claude suffered the severe hemorrhage which ended his life.

On the 16th of June 1929 Pope Pius XI beatified Claude La Colombière, whose charism, according to St. Margaret Mary Alacoque, was that of bringing souls to God along the gospel way of love and mercy which Christ revealed to us.