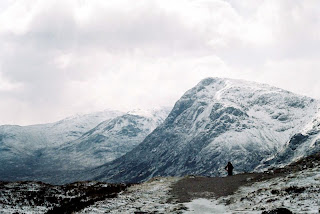 The massacre of the MacDonald clan by the Campbell clan, and the subsequent horror of women and children freezing to death in the west highland glen was the scandal of William and Mary's reign--what did William III know and when? Finally it was determined that he did not know the intent of the Earl of Argyll's foray into Glencoe, and an underling received the blame.

According to this site:

The massacre commenced about five o'clock in the morning at three different places at once. Glenlyon, with a barbarity which fortunately for society has few parallels, undertook to butcher his own hospitable landlord and the other inhabitants of Inverriggen, where he and a party of his men were quartered, and despatched Lieutenant Lindsay with another party of soldiers to Glencoe's house to cut off the unsuspecting chief. Under the pretence of a friendly visit, he and his party obtained admission into the house. Glencoe was in bed, and while in the act of rising to receive his cruel visitors, was basely shot at by two of the soldiers, and fell lifeless into the arms of his wife. The lady in the extremity of her anguish leaped out of bed and put on her clothes, but the ruffians stripped her naked, pulled the rings off her fingers with their teeth, and treated her so cruelly that she died the following day. The party also killed two men whom they found in the house, and wounded a third named Duncan Don, who came occasionally to Glencoe with letters from Braemar.

While the butchery was going on in Glencoe's house, Glenlyon was busily doing his bloody work at Inverriggen, where his own host was shot by his order. Here the party seized nine men, whom they first bound hand and foot, after which they shot them one by one. Glenlyon was desirous of saving the life of a young man about twenty years of age, but one Captain Drummond shot him dead. The same officer, impelled by a thirst for blood, ran his dagger through the body of a boy who has grasped Campbell by the legs and was supplicating for mercy.

A third party under the command of one Sergeant Barker, which was quartered in the village of Auchnaion, fired upon a body of nine men whom they observed in a house in the village sitting before a fire. Among these was the laird of Auchintriaten, who was killed on the spot, along with four more of the party. This gentleman had at the time a protection in his pocket from Colonel Hill, which he had received three months before. The remainder of the party in the house, two or three of whom were wounded, escaped by the back of the house, with the exception of a brother of Auchintriaten, who having been seized by Barker, requested him as a favour not to despatch him in the house but to kill him without. The sergeant consented, on account of having shared his generous hospitality; but when brought out he threw his plaid, which he had kept loose, over the faces of the soldiers who were appointed to shoot him, and thus escaped.
and then:

After the destruction of the houses, a heart-rending scene ensued. Ejected from their dwellings by the devouring element, aged matrons, women with child, and mothers, with infants at their breasts and followed by children on foot, clinging to them with all the solicitude and anxiety of helplessness, were to be seen wending their way, almost in a state of nudity, towards the mountains in a quest of some friendly hovel, beneath whose roof they might seek shelter from the pitiless tempest and deplore their unhappy fate. But as there were no houses within the distance of several miles, and as these could only be reached by crossing mountains deeply covered with snow, a great number of these unhappy human beings, overcome by fatigue , cold, and hunger, dropt down and perished miserably among the snow.

Jim MacLean's ballad depicts the horror of the attack:

They came in a blizzard, we offered them heat
A roof for their heads, dry shoes for their feet
We wined them and dined them, they ate of our meat
And they slept in the house of MacDonald.

They came from Fort William with murder in mind
The Campbell had orders King William had signed
"Put all to the sword" these words underlined"
And leave none alive called MacDonald".

They came in the night when the men were asleep
This band of Argyles, through snow soft and deep
Like murdering foxes amongst helpless sheep
They slaughtered the house of MacDonald.

Some died in their beds at the hand of the foe
Some fled in the night and were lost in the snow
Some lived to accuse him who struck the first blow
But gone was the house of MacDonald.

Image Source: wikipedia.
Posted by Stephanie A. Mann at 2:05 AM

Email ThisBlogThis!Share to TwitterShare to FacebookShare to Pinterest
Labels: Glencoe, William and Mary of England