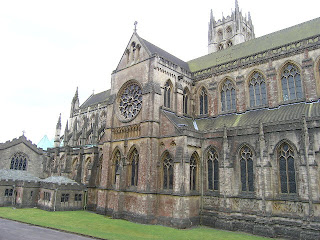 Going to this summer school would certainly be no punishment:
Why not join us and students of Thomas More College this summer in a two-week course, based in Oxford and the West country, on the question of Catholic identity and the vocation of the Catholic writer? We also touch on the deeper question of what it means to be human, how a vision of humanity was imperilled by the English Reformation which helped to create the modern world, and how the Literary Revival (from Newman to Tolkien) tried to recover and reclaim it. . . .
After a week at Downside, where we will have the opportunity to participate in daily Mass and the Divine Office, we will proceed to Oxford, where we will stay at St Benet’s, a Private Hall of the University and also a Benedictine house. There we will learn about the pivotal role of Oxford in the history of British Christianity, from its time as a recusant centre to the revival of Catholic culture in the 19th century with the Oxford Movement, Blessed John Henry Cardinal Newman and 20th century writers such as Chesterton, Greene, and Waugh. We will also look at the influence of the Inklings, particularly C.S. Lewis and J.R.R. Tolkien, and visit sites associated with them as well as with Newman. Finally we will visit the capital, paying our respects near the remains of St Thomas More in the Tower of London and visiting Westminster Abbey and the newly reconstructed Globe Theatre, where Shakespeare’s plays were once performed.
More about the schedule this August here.
Posted by Stephanie A. Mann at 2:18 AM

Email ThisBlogThis!Share to TwitterShare to FacebookShare to Pinterest
Labels: Catholic England, the English Reformation, The Inklings, the Oxford Movement