Anthony Babington and His Eponymous Plot 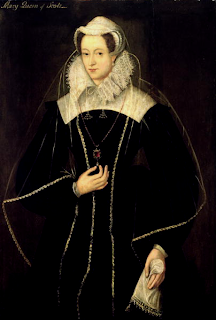 Anthony Babington was executed at St. Gile's Field on September 20, 1586, along with a Jesuit priest, John Ballard and several other conspirators--Chidiock Tichborne, Thomas Salisbury, Henry Donn among them. As traitors, of course, they were hung, drawn and quartered, but their executions and sufferings were so extreme--especially considering their relative youth--that the onlookers began to have sympathy for them. Queen Elizabeth ordered that the rest of the traitors to be executed were to be hung until dead (then cut up per the standard operating procedure).

Babington involved the imprisoned Mary, Queen of Scots in his plot to assassinate Elizabeth and bring Mary to the throne of England and this led to her execution within months. Beyond the plot's murderous intent, the disturbing aspect of this conspiracy is that Elizabeth's spymaster, Sir Francis Walsingham, knew about the plot because he had a double agent in place who also served as an agent provocateur. There is an element of entrapment--especially regarding Mary's replies to correspondence--in Walsingham's handling of the matter.

Young Chidiock Tichborne wrote an elegy while in the Tower which gained some fame with its haunting contrasts (note that all but one of the words is but one syllable):

My prime of youth is but a frost of cares,
My feast of joy is but a dish of pain,
My crop of corn is but a field of tares,
And all my good is but vain hope of gain;
The day is past, and yet I saw no sun,
And now I live, and now my life is done.

My tale was heard and yet it was not told,
My fruit is fallen and yet my leaves are green,
My youth is spent and yet I am not old,
I saw the world and yet I was not seen;
My thread is cut and yet it is not spun,
And now I live, and now my life is done.

I sought my death and found it in my womb,
I looked for life and saw it was a shade,
I trod the earth and knew it was my tomb,
And now I die, and now I was but made;
My glass is full, and now my glass is run,
And now I live, and now my life is done.
Posted by Stephanie A. Mann at 2:08 AM