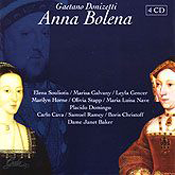 The Metropolitan Opera is presenting Anna Netrebko as Donizetti's Anna Bolena. Heidi Waleson reviews the production and performance for the Wall Street Journal:

In this fictionalized Tudor tale, librettist Felice Romani kept the focus on the personal rather than the political: Henry VIII of England wants to get rid of his second wife, Anne Boleyn, so that he can marry her lady-in-waiting, Jane Seymour. He brings Lord Richard Percy, Anne's first love, back from exile so that he can find an excuse to accuse her of adultery. With the unwitting aid of Smeaton, a court musician, and Lord Rochefort, Anne's brother, the trap is easily sprung.

Read the rest of the review here. Ms. Netrebko's performance is not well-received.

An interesting feature of this opera is the pants role--Mark Smeaton, "Smeton" is sung by a contralto. Anna is a bel canto, mad-scene soprano and Jane Seymour is a mezzo. Henry VIII is a bass and Percy is the tenor.

In the 1970's Beverly Sills sang all three Donizetti queens (the title roles in Maria Stuarda and Anna Bolena, and Elizabeth I in Roberto Devereux) at the New York City Opera. You can hear Sills and Shirley Verrett singing the Anna and Giovanna duet, "Sul suo capo aggravi un Dio" here--or can see the diva of the day with helpful German subtitles. Jane warns Anne that Henry wants to replace her with a new wife, and Anne doesn't take the news well--and the tension increases when she finds out Jane is her rival--"fuggi, fuggi" she keeps telling Jane. But Jane can't leave: she has more to sing! It's opera and it's complicated. Jane says at one point, "I love Henry and I am ashamed." Anne replies, "The King alone is guilty." At least it ends with a high C.

According to this website, there is one complete recording, with Elena Souliotis as Anna; Marilyn Horne as Giovanna, and Janet Baker at Smeton with Placido Domingo as Percy! What a cast!
Posted by Stephanie A. Mann at 2:13 AM