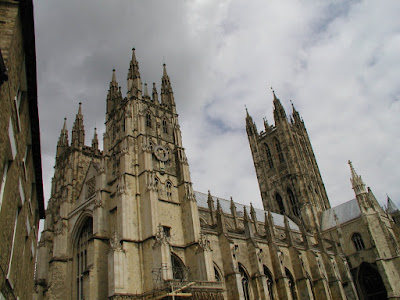 Since yesterday was the feast of St. Gregory the Great--who dispatched St. Augustine of Canterbury to the Angles as a missionary, it just seems appropriate to highlight the great Cathedral of Canterbury today. The official title is "Cathedral and Metropolitical Church of Christ at Canterbury".

Of course, the shrine of St. Thomas a Becket was the main attraction for many years there until the English Reformation, but the Catholic see produced other saints:

The Cathedral is still a place of pilgrimage and the website is filled with information about what to see and how to see it. Unlike some former shrines/pilgrimage sites, Canterbury has not attempted at all to recreate the great tomb and shrine--a candle marks the spot.

The RC church across the street, St. Thomas of Canterbury, seems very small after the soaring greatness of the abbey church and cathedral. According to the church website:

The Catholic Mission in Canterbury was re-established about 1750 and dates back to the Hales family who lived at St Stephen's, Hackington, a village to the north west of the city. Sir Edward, third Baronet Hales, was a good friend of King James II and tried to help him escape when, at the “Glorious Revolution” in 1688, William of Orange was invited over by the Whig Party in Parliament to take over the country as King William III. Edward became a Catholic just as his friend James was, and undoubtedly Holy Mass was celebrated from time to time at Place House, as the old Tudor mansion which he had bought was called. Certainly, when his great-grandson, Edward, became the fifth Baronet in 1744 and moved into Place House - rebuilt in 1769 as Hales Place - Mass and Divine Worship were held there without interruption until 1923. From 1855, when Mary Ann Wood gave the house at 60, Burgate Street (now 59, Burgate), for the use of “a priest in the city of Canterbury”, Catholic worship started once again in the city. At first, the missionary priest struggled to provide Mass facilities by celebrating in his house, and then by building extensions to the house as chapels. It was the arrival of Father Richard Power, whose dynamic enthusiasm enabled both the church and a new parish school to be built, that established St Thomas' Catholic Mission on a firm footing in Canterbury.

The Church of St Thomas of Canterbury was built in 1874/75, and was opened on Tuesday, 13th April, 1875, with Cardinal Manning preaching the first sermon. The architect was John Green Hall, a local man who had designed other churches in Canterbury. 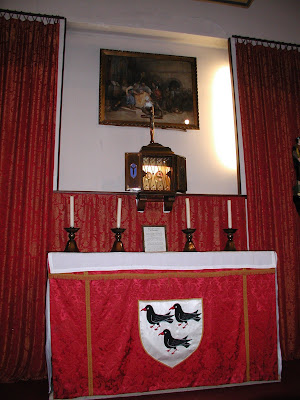 A chapel contains relics of St. Thomas a Becket:
The chapel at the south-west end of the aisle is the Martyrs' Chapel and contains the shrine with the relics of St Thomas of Canterbury. The Martyrs' Chapel The reliquary before 1953 contained two relics of our patron: a piece of St Thomas' vestment and a piece of bone from his body. These came from Gubbio in Umbria, Italy, and were presented to St Thomas' church by Mary Hales over one hundred years ago. The pedigree of the relics is well authenticated. On Tuesday, 7th July, 1220, the body of St Thomas, which had been kept in the crypt of Canterbury Cathedral since the saint's martyrdom on Tuesday, 29th December, 1170, was translated to an imposing new shrine behind the high altar of the cathedral where it remained until its complete destruction by King Henry VIII in 1538. On the occasion of the Translation in 1220, some Cardinals from Rome were present as witnesses, and they took the opportunity of removing some small relics which accompanied them back to Italy. Two of these relics were presented to St Thomas' in the 19th century, and a third, a piece of the saint's finger, in 1953 by the Prior of Chevetogne, Father Thomas Becquet, a colateral descendant of the martyred archbishop.

My husband and I visited the Cathedral and the Catholic church several years ago: here is a link to some more pictures.