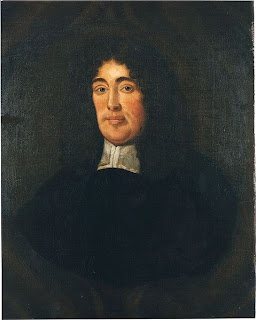 To me, there are two great villains of the English Reformation and its aftermath: Richard Topcliffe (boo, hiss) and Titus Oates (boo, hiss). [Sir Richard Rich is the close third.]
Titus Oates was born on September 15, 1649 and it sounds like he began his career of opportunism, double-dealing and perjury as a young man:
Titus Oates was born in Oakham. His father, Samuel, was the director of Marsham in Norfolk before becoming an Anabaptist during the Puritan Revolution [aka the English Civil War] and rejoining the Church of England at the Restoration [of Charles II]. Titus was educated at Merchant Taylors' School, Gonville and Caius College, Cambridge, and St. John's College, Cambridge. Known as a less than astute student, he was ejected from both colleges. A few months later, he became an Anglican priest [how?] and Vicar of the parish of Bobbing in Kent. During this time Oates was charged with perjury having accused a schoolmaster in Hastings of sodomy. Oates was put in jail, but escaped and fled to London. In 1677 he got himself appointed as a chaplain of the ship Adventurer in the English navy. He was soon accused of buggery (i.e., sodomy, which was a capital offence in England at the time) and spared only because of his clergyman's status.
After the navy he joined the household of the Catholic Duke of Norfolk as an Anglican chaplain [I presume to Anglican servants]. On Ash Wednesday, 1677 he was received into the Catholic Church. At the same time Titus agreed to co-author a series of anti-Catholic pamphlets with Israel Tonge, whom he had met through his father Samuel, who had once more reverted to the Baptist doctrine. [How committed to the Church can you be if you immediately start working on anti-Catholic propaganda?]
Then he went off to the Continent and later returned to England to start the rumor mill of the "Popish Plot":
Oates was involved with the Jesuit houses of St. Omer (in France) and the Royal English College at Valladolid, Spain (like many diocesan seminaries of the day, this was a Jesuit-run institution) [founded by Father Robert Parsons, SJ]. Oates was admitted to the course in Valladolid by the support of Richard Strange, despite a lack of basic competence in Latin. He later claimed, falsely, that he had become a Catholic doctor of Divinity. Thomas Whitbread took a much firmer line with Oates than Strange had, and in June 1678 expelled him from St. Omer.
When he returned to London, he rekindled his friendship with Israel Tonge. Oates explained that he had pretended to become a Catholic to learn about the secrets of the Jesuits and that, before leaving, he had heard about a planned Jesuit meeting in London.
I think he can very well be compared to Sir Richard Rich--switching sides or even seeming to favor both sides at once. From the narratives I've read while working on my second book [working title: Their Faith Was Their Crime: The English Catholic Martyrs, 1535 to 1681] it seems that when one person finally found him out--Thomas Whitbread, SJ--Oates had to have revenge. As he concocted the Popish Plot, he must have begun to believe what he said was true. He certainly did not waiver from his story even when it began to fall apart around him. When I've posted about the priest-martyrs like Blesseds John Kemble and David Lewis, I have wondered about the farce of the questioning they endured. Oates and Bedloe or their other fellow liars asking elderly John Kemble about plots that never existed, meetings that never occurred, contacts that were never made. All the priests could do was tell the truth; all that Oates could do was make up more lies.
Posted by Stephanie A. Mann at 2:08 AM