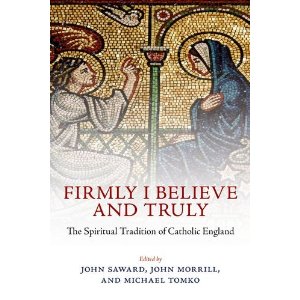 Firmly I Believe and Truly: The Spiritual Tradition of Catholic England -- Edited by John Saward, John Morrill and Michael Tomko!

Firmly I Believe and Truly celebrates the depth and breadth of the spiritual, literary, and intellectual heritage of the Post-Reformation English Roman Catholic tradition in an anthology of writings that span a five hundred year period between William Caxton and Cardinal Hume. Intended as a rich resource for all with an interest in Roman Catholicism, the writings have been carefully selected and edited by a team of scholars with historical, theological, and literary expertise. Each author is introduced to provide context for the included extracts and the chronological arrangement of the anthology makes the volume easy to use whilst creating a fascinating overview of the modern era in English Catholic thought. The extracts comprise a wide variety writing genres; sermons, prayers, poetry, diaries, novels, theology, apologetics, works of controversy, devotional literature, biographies, drama, and essays. Includes writings by:

Find the complete Table of Contents here. It's a who's who of Catholic England, that's for sure!

The book's features, per OUP:

The only sting: the price--$65.00! OUP says it is available in October; Amazon in mid-November. Looks wonderful!
Posted by Stephanie A. Mann at 2:09 AM