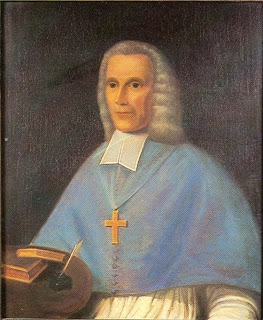 Richard Challoner was born on September 29, 1691 in Lewes, Sussex (former site of Lewes Abbey) of Protestant (Presbyterian) parents. When his father died, his mother became a servant in a Catholic household and both she and Richard became Catholics--he was baptized when he was thirteen years old. He lived with another Catholic family in Northamptonshire, where the lady of the house was one of Blessed William Howard's daughters, Lady Anastasia Holman. The chaplain of the household, Father John Gother, also influenced young Challoner. He went to the English College at Douai in 1705, where he stayed for 25 years as student and professor and was ordained in 1716.

In 1730 he returned to England as a missionary priest: there he lived and worked in London, disguised as a layman. Challoner wrote several books: Think Well On It, a devotional; Memoirs of Missionary Priests and other Catholicks of both Sexes who suffered Death or Imprisonment in England on account of their Religion, from the year 1577 till the end of the reign of Charles II (2 vols. 1741), the main source for information about the Catholic martyrs of the recusant era; The Garden of the Soul, another devitional; and the revision of the Douai/Rheims translation of the Holy Bible into English!

In 1758 he was named the Vicar Apostolic of the London District. The Vicars Apostolic were ordained Bishops who supervised priests throughout England, in lieu of the usual diocesan structure. Challoner had been the Coadjutor Bishop for Benjamin Petre and succeeded him.

In 1778, Parliament passed The Catholic Relief Act and two years later, Lord George Gordon, head of the Protestant Association, instigated the Gordon Riots, resulting in days of anti-Catholic violence. Bishop Challoner never recovered from the shock and fear of hiding from the mobs searching for him. He was almost 90 years old and died on January 12, 1781. Bishop Richard Challoner, Vicar Apostolic, was a faithful and true leader of Catholics in the eighteenth century. I will be on the Son Rise Morning Show today at 7:45 a.m. Eastern/6:45 a.m. Central, etc, to discuss the life and legacy of this great Catholic bishop.
Posted by Stephanie A. Mann at 2:15 AM