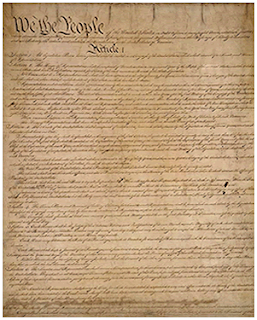 Today is Constitution Day in the U.S.A., although it was really "celebrated" on September 16. Here is a link to the official website, which includes profiles of Daniel Carroll and Thomas Fitzsimmons, the two Catholic signers of the Constitution. Carroll was the cousin of Charles Carroll of Carrolltown and brother of John Carroll, Jesuit priest (until the Society of Jesus was suppressed by the pope) and first Catholic bishop in the U.S.A. More about the Carroll family here:

Charles Carroll of Carrollton (1737-1832) was the most illustrious and best-known of the Carrolls. He was the only signer whose property — Carrollton — was mentioned in the Declaration of Independence. Carrollton was the 10,000-acre estate in Frederick County, Maryland, that Charles Carroll's father had given him on his return to America from his education in Europe.

At the time he signed the Declaration, it was against the law for a Catholic to hold public office or to vote. Although Maryland was founded by and for Catholics in 1634, in 1649 and, later, in 1689 after the Glorious Revolution placed severe restrictions on Catholics in England, the laws were changed in Maryland, and Catholicism was repressed. . . .

Daniel Carroll of Rock Creek (1730-1796) was a member of the Continental Congress (1781-1783), and a signer of the Articles of Confederation. He was a delegate to the Constitutional Convention and one of only two Catholic signers of the United States Constitution. (The other Catholic signer was Thomas Fitzsimons of Pennsylvania.) At the Constitutional Convention, Daniel Carroll played an essential role in formulating the limitation of the powers of the federal government. He was the author of the presumption — enshrined in the Constitution — that powers not specifically delegated to the federal government were reserved to the states or to the people.

Daniel Carroll later became a member of the first United States Congress (1789-1791). He was also a member of the first Senate of Maryland, where he served up to the time of his death. He was appointed by Washington as one of the first three commissioners of the new federal city that is now known as the District of Columbia. In today's terminology, he would have been considered the mayor of Washington, D.C.

John Carroll (1735-1815), Daniel Carroll's younger brother, was educated in Europe, joined the Jesuit order, and was ordained a priest. He founded a private school for boys and named it after the town where it was located, Georgetown, a port on the Potomac River that later became part of Washington, D.C. He went on to be elected — by all the Catholic priests in America — to become America's first Catholic bishop. He later became archbishop of Baltimore. In any procession of American bishops, the archbishop of Baltimore always goes last in recognition of its role as America's oldest diocese. In 1789, John Carroll founded the college in Georgetown that later became known as Georgetown University.

I mentioned the Carroll family attending the Catholic college in St. Omers founded by Father Robert Parsons in Supremacy and Survival: How Catholics Endured the English Reformation.

Finally, I want to report on a fascinating lecture I attended this week at Friends University here in Wichita. Friends U. is a Quaker university--they have a chorus called "The Singing Quakers". Anyway, the Garvey Institute of Law at Friends co-sponsored a Constitution Day Program Tuesday evening on "How much did Kansas Really Bleed? Kansas, the Constitution, and the Civil War in History and Today" with support from the Kansas Humanities Council. The speaker was Dr. Brian Craig Miller, Assistant Professor of History at Emporia State University. His talk was excellent, including opportunities for the audience to answer questions and discuss issues. One of our other universities and my alma mater will present a Constitution Day NEXT week. More details here.

Oh, and the answer to the question "How much did Kansas Really Bleed?"--for all the exagerration of the newspapers back east at the time: not so much. Fifty-six (56) were killed during the Bleeding Kansas period from 1854 to 1861 (yes, 2011 is Kansas's sesquescentennial year!). During the Civil War, 20,097 Kansas men signed up for the Union Army--more than 8,000 were killed. Kansas always exceeded the quota for enlistment during the Civil War by two or three times.
Posted by Stephanie A. Mann at 2:36 AM