The Rood and the Triumph of the Cross 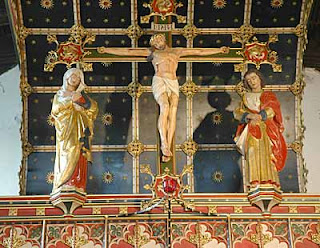 Today is the Feast of the Triumph of the Cross, so a quick post on the Rood Screen and some background is appropriate, via The New Liturgical Movement blog, here and here. More beautiful images like the one above are included in those posts.

This site includes detail about Rood Screens in Norfolk Churches, with this detail about their purpose before the English Reformation and their fate after it began:

The purpose of the screen was to divide the chancel, with its altar, from the nave, which was often used for secular purposes. It was an invariable part of the furnishing of every church until the Reformation, usually placed directly beneath the chancel arch, though sometimes brought forward slightly so that it could stretch right across the nave and aisles. The screen was generally surmounted by a loft, upon which stood the Rood, a giant figure of Christ crucified. The Reformation saw the destruction of virtually every Rood and the great majority of lofts, though the screens themselves were often spared as they were a useful feature in the ordering of the church. Most figure sculpture and painting depicted thereon, however, was generally defaced.

The two principal areas where screens remain are East Anglia and the South-West, though the two types differ radically. East Anglia in the Middle Ages was the richer of the two areas, and the churches are therefore bigger and loftier. So in Norfolk and Suffolk the typical screen rises much higher than in the south-west, has tall, narrow openings and very slender posts between the bays, and a general air of lightness and elegance.

Once you've thought of the Rood Screen and the Rood, the next association is The Dream of the Rood.

Listen! The choicest of visions I wish to tell,
which came as a dream in middle-night,
after voice-bearers lay at rest.
It seemed that I saw a most wondrous tree
born aloft, wound round by light,
brightest of beams. All was that beacon
sprinkled with gold. Gems stood
fair at earth's corners; there likewise five
shone on the shoulder-span. All there beheld the Angel of God,
fair through predestiny. Indeed, that was no wicked one's gallows,
but holy souls beheld it there,
men over earth, and all this great creation.
Wondrous that victory-beam--and I stained with sins,
with wounds of disgrace. I saw glory's tree
honored with trappings, shining with joys,
decked with gold; gems had
wrapped that forest tree worthily round.
Posted by Stephanie A. Mann at 2:48 AM

Email ThisBlogThis!Share to TwitterShare to FacebookShare to Pinterest
Labels: English Reformation, Rood Screens, The Stripping of the Altars, Triumph of the Cross