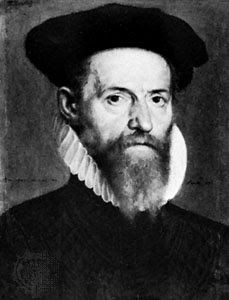 Thomas Erastus was born on September 7, 1524. The main reason his name comes up on a blog about the English Reformation is that the terms Erastian and Erastianism are derived from his name. Erastianism is the doctrine that the state is supreme over the church in ecclesiastical matters, and it is common to say that the relationship between the state and the established Church of England is Erastian. For the eastern Church, Caesaropapalism means the same thing: except that it centers the authority on the monarch, who adopts the role of the spiritual leader of his country as well as the temporal.

The Catholic Encyclopedia explains what Erastianism means for the Church in the context of the life and teaching of Thomas Lieber or Liebler of Baden Switzerland.

Henry VIII was really following the path of Byzantium, establishing England as an empire and himself as the Supreme Head and Governor of the Church as well as the King of England and Ireland, claiming total control of his empire. He was a Caesar-Pope, and the Convocation of Bishops's attempt to limit his power ("as far as the law of Christ allows") failed utterly. Edward VI did not live long enough to claim the title, and Mary I wanted rid of it as soon as possible! Elizabeth I, though she lost the "Governor" part of the title, still controlled the compromise of the via media, the selection of bishops, and other matters of discipline and reform.

The Church of England, as I commented in Supremacy and Survival was really under Parliament's thumb in the nineteenth century--that's what inspired the Oxford Movement. Church and State were so close that Thomas Arnold of the famed Rugby School thought that government officials were as able as ordained ministers to perform religious services, in his attempt to reduce the differences between ministers and laity he derided as "priestcraft". Parliament's decision to close down certain Anglican dioceses in Ireland precipitated the leaders of the movement to protest against the "National Apostacy" of treating the church like it was just a part of the secular government. Keble and the early Oxford Movement's argument for revival of the Church of England meant that the state control of the Church had to end: the Church should not be established by or based upon the State at all. For it to be part of the True Church--a branch of it, at least--its foundation had to be Jesus Christ and the Apostles he founded His Church upon. The bishops of the Church of England, if they were to have any true spiritual authority, had to be successors of the apostles, not officials of the House of Lords.

As I commented earlier this year, the UK Parliament flexed its Erastian muscles over the issue of ordaining women bishops--just make the Church of England follow government anti-discrimination laws and put an end to the debate in the Church over the issue. Among the three parties of the Church of England (the High, Broad, and Low), the Broad Church, exemplified by Thomas Arnold, Charles Kingsley, and others, would most favor the modern Erastian goals cited by the effort above. More in favor of liberal reform and less concerned about definitions of doctrine, they would favor the State leading the Church into enlightenment and toleration (not that they'd tolerate any dissent from that enlightenment!)

So, Happy Birthday, Thomas (Lieber) Erastus! I guess.
Posted by Stephanie A. Mann at 2:08 AM