The Latest Biography of Mary I 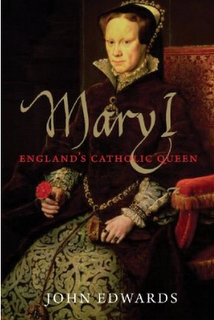 The book jacket declares the biography to be ‘original and deeply researched’, offering ‘fresh understandings of her religious faith and policies, as well as her historical significance in England and beyond’. It succeeds in this and it is certainly a biography that should be consulted by any Mary/Tudor scholar. Those looking for a biography that merely discusses Mary’s personal history – who wish for another presentation of what Edwards’s brilliantly calls the ‘‘little woman’ approach’ to Mary (p. 105), that dwells on her ‘tragedies’ and purports an image of her as a domesticated queen denying her of any acumen and unable of governing decisively – will be disappointed. But it is his refusal to support such an image that attracts me to this book. It manages to cover a wide range of themes, contains an excellent bibliography and regular footnoting (though I felt at times Edward could have referenced more). The seventeen illustrations, though in black and white, have very detailed labels. The Mary that emerges from this book is a queen convinced that God favoured ‘and done great things for her, by bringing her to both throne and marriage’ (p. 347). It was such ideas that encouraged Mary’s steadfastness and determination, not always wisely pursued but nonetheless apparent and sometimes courageous. But it is not admiration of Mary that Edwards seems to seek. It is the recognition that she was monarch with achievements, long since ‘undermined and attacked’ but nonetheless present and necessary to appraise. He is neither the first nor the last historian to recognise the successes of Mary’s reign and to defend her ability to govern. But he is one of the first to have taken her role as a Habsburg wife very seriously.

One thing I like about the book (judging by its cover) is that the author uses the form "Mary I" instead of "Mary Tudor" or "Bloody Mary" (even in quotes "'Bloody Mary'")!
Posted by Stephanie A. Mann at 2:23 AM