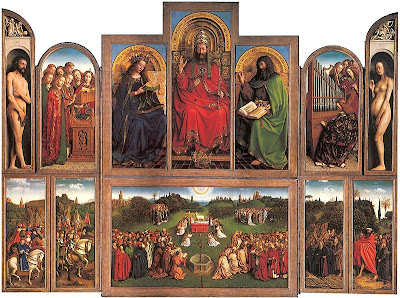 Thanks to The Catholic Herald on facebook, I noticed this article about an exhibit at London's National Gallery on "Devotion on Display: Italian Altarpieces Before 1500".

"London has become the centre for exhibitions of Catholic art this summer. There are the relics at the British Museum [Treasures of Heaven] and this equally outstanding show at the National Gallery. Both are complementary and are recommended without reserve."

As part of a programme of summer shows focusing on the National Gallery’s collection, ‘Devotion by Design’ explores the function, the original location, and the development of altarpieces in Italy during the late Middle Ages and the early Renaissance.

Altarpieces in context
These objects furnished altars in churches and were not originally intended to hang in a gallery as we see them today. Instead, they were created for a specific sacred context, forming the focus of devotion for worshippers.

Using the Gallery’s own collection, this exhibition investigates the development of altarpieces, looking at changes in form, style and type. It examines not only the evolution of their physical structure but also their relationship to their frames and to the monumental architecture that surrounded them.

And Father Symondson describes the effect:

"Devotion by Design" progresses by examining different types of altarpieces such as the polyptich (a picture, or relief, made up of several parts) and pala (a large version used only for a single picture). This is followed by a room devoted to how they came into being: commissioning, choices and contracts. In the section devoted to sacred space an attempt is made by way of explanation to reconstruct an altar. Over time many altarpieces have been dismembered and their fragments dispersed and evidence of that is found in a part devoted to dislocations, notable for the work of Fra Filippo Lippi. It concludes with a final room obscurely entitled “a question of definition”. The result is a total immersion in the subject represented by paintings of great beauty.

These two exhibitions do sound like great pilgrimage destinations.

(the illustration above is The Ghent Altarpiece, downloaded from Wikipedia)