Lancelot Andrewes, September 25, 1626--His Cathedrals and His Influences 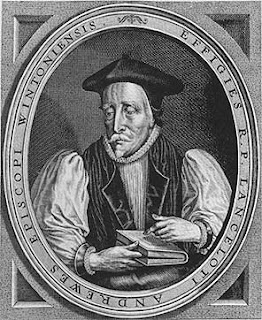 The great Anglican divine, Lancelot Andrewes, Bishop of Chicheser, Ely and finally Winchester, overseer of the Authorized Translation of the Holy Bible (the King James version) died on September 25, 1626.

James I liked Andrewes' sermon style and he became Lord High Almoner, in charge of charity. Andrewes also preached the commemorative sermon after the discovery of the Gunpowder Plot, argued with Robert Bellarmine over the Divine Right of Kings, and tried to assist James I in convincing the Scots to give up the Kirk for the Church of England.

He is commonly thought of as an Anglo-Catholic, and his theology of the Eucharist was quite high for he believed in the Real Presence--although he did not quite accept transubstantiation as an explanation. Andrewes celebrated Holy Communion with candles, incense, and beautiful altar furnishings (in private). His Private Devotions were translated from the Greek by Blessed John Henry Newman and from the Latin by John Mason Neale in this edition. This article describes Newman's interest in the Caroline divines of the 17th century. Remember also that T.S. Eliot admired Archbishop Andrewes.

Ely Cathedral, one of the cathedrals he would have known, is a Norman style cathedral. Before the English Reformation, it would have been the site of many pilgrimages to the shrine of St. Etheldreda. According to the cathedral web site today:

She was the daughter of Anna, king of East Anglia, and was born, probably, at Exning, near Newmarket in Suffolk. At an early age she was married (c.652) to Tondberht, ealdorman of the South Gyrwas, but she remained a virgin. On his death, c.655, she retired to the Isle of Ely, her dowry. In 660, for political reasons, she was married to Egfrith, the young king of Northumbria who was then only 15 years old, and several years younger than her. He agreed that she should remain a virgin, as in her previous marriage, but 12 years later he wished their marital relationship to be normal. Etheldreda, advised and aided by Wilfred, bishop of Northumbria, refused. Egfrith offered bribes in vain. Etheldreda left him and became a nun at Coldingham under her aunt Ebbe (672) and founded a double monastery at Ely in 673. (from FARMER, David: The Oxford Dictionary of Saints, 3rd ed. OUP, 1992.) . . .

For centuries, Etheldreda's shrine was the focus for vast numbers of medieval pilgrims.

It was destroyed in 1541, but a slate in the Cathedral marks the spot where it stood, and the 23 June and 17 October are still kept as major festivals in the Cathedral. Some relics are alleged to be in St Etheldreda's Church, Ely Place, London (where the bishops of Ely formerly had their London residence). Her hand, which was discovered in a recusant hiding place near Arundel in 1811, is claimed by St Etheldreda's Roman Catholic church at Ely. . . .
Work on the present Cathedral began in the 11th century under the leadership of Abbot Simeon, and the monastic church became a cathedral in 1109 with the Diocese of Ely being carved out of the Diocese of Lincoln. The monastery at Ely was dissolved by Henry VIII in 1539. Ely suffered less than many other monasteries, but even so, statues were destroyed together with carvings and stained glass. St Etheldreda's Shrine was destroyed.

The Cathedral was refounded with a Chapter of eight canons in 1541 as was the Kings School. Robert Steward, the last Prior of the monastery, became the first Dean.

I like that choice of words: "is claimed by"! That the former Prior became the first Dean was a pretty common event in the "transition" from the dissolution of the monasteries to the establishment of new cathedral chapters.

Another of Andrewes' cathedrals was Chichester: St. Richard of Chichester was the main draw before the Reformation:

Richard of Wych, bishop of Chichester from 1245 - 1253, was canonized in 1262 when plans were made to move his body from its first burial place in the Nave to the Retroquire. The ceremony of translation took place on 16 June 1276, in the presence of King Edward I. From that day until the shrine was destroyed in 1538, the Shrine of St Richard attracted pilgrims from all over England and beyond. In 1930 an alter (sic) was restored to the site of the shrine.

Finally, Winchester, which I have noted before in the Sunday Shrine Series.
Posted by Stephanie A. Mann at 2:15 AM