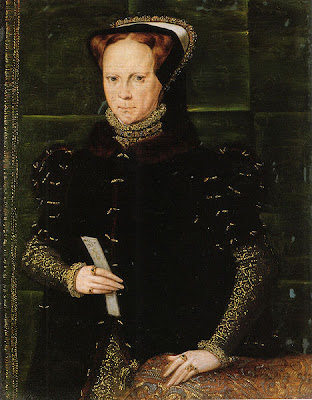 Mary Tudor: Renaissance Queen posted this analysis of "A Mother and Husband to the Realm? How Mary’s Speech as Queen Helped Elizabeth I" based on an article by Cristy Beemer,‘The Female Monarchy: Rhetorical Strategy of Early Modern Rule’ (Rhetoric Review, 30, 8, pp. 258-74):

But it is Beemer’s specific focus on Mary’s speech that I wanted to draw attention to. Like several recent historians, namely Judith Richards, Beemer argues that Elizabeth had a lot to thank her sister for as Mary of course governed first, challenged preconceived notions of female rule first, tested the waters so to speak, and made mistakes which proved equally valuable for Elizabeth. It is Mary’s speech before the Guildhall in 1554 that Beemer focuses on specifically. In 1554 the rebels of Wyatt’s uprising (primarily a protest against Mary’s prospective marriage to Philip of Spain) marched towards the city of London and the authorities were anxious that they would receive a warm reception once they got there or at least could not be held outside the city. Mary, who was advised to leave the capital, decided to stay and give a rousing speech at the Guildhall, which won her acclaim and plenty of support. During the speech, Mary declared that she was,

‘...wedded to the realm and laws of the same (the spousal ring whereof I have on my finger, which never hitherto was, nor hereafter shall be left off), you promised allegiance and obedience to me’ (p. 263).

Beemer points out that Mary very deliberately avoided calling herself a ‘wife’. She is ‘wedded’ to her kingdom but she employs the word ‘spouse’. She does not cast herself in the submissive role of a wife who was expected to obey her husband duly. Thus Mary gives her subjects no reason to believe they hold the power to command her; ‘Mary takes on the role as the person to whom obedience is sworn’ (p. 264). Beemer concludes ‘in one of the first examples of the strategy of gender play that female monarchs used to establish ethos, Mary will not be a wife to England, but rather, a husband’ (ibid).

As you might recall, I have kept up a little with this re-evalution of Mary I's reign, especially through the recent flurry of biographies--and one aspect has been the fact that Mary blazed the path that Elizabeth would follow. Mary set the precedent for the coronation of the female monarch, for authoritative rule, for escaping attempted coups and other more positive aspects.

The rest of the article chiefly concerns Elizabeth ‘mirroring’ her sister. And if we credit Beemer’s arguments, she was a useful model of queenship to follow.

Beemer’s article is well worth reading . . . She is not the first, nor probably the last historian to draw attention to the legacy Mary left to Elizabeth, an inheritance which has forever been seen in a negative fashion (loss of Calais, religious turmoil, etc), but which was more fruitful than many have liked to admit.
Posted by Stephanie A. Mann at 2:11 AM

Email ThisBlogThis!Share to TwitterShare to FacebookShare to Pinterest
Labels: Elizabeth I, Mary I, reassessment