The Agnus Dei and "agni dei" in Recusant England 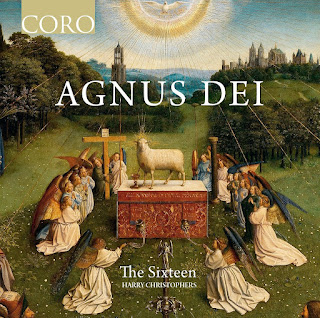 I've been listening to a new CD from The Sixteen and Harry Christophers: Agnus Dei. It's a compilation of performances of different settings of the Agnus Dei, The Lamb of God, part of the Ordinary of the Holy Sacrifice of the Mass, chanted/sung before Holy Communion:

(Lamb of God, who takes away the sins of the world, have mercy on us

Lamb of God, who takes away the sins of the world, have mercy on us

Lamb of God, who takes away the sins of the world, grant us peace.)

There are 20 (twenty) settings on this CD: 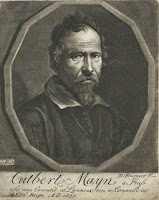 You might recall that St. Cuthbert Mayne, one of the Forty Martyrs of England and Wales and the protomartyr of the seminary priests who returned to England as missionaries after ordination on the Continent, was condemned partially because he had brought an agnus dei into England:
He was ordained in 1575 and came to England with St. John Payne (Payne and Mayne!) in 1576. When Father Cuthbert Mayne was arrested in June, 1577, authorities had some trouble in gathering evidence that corresponded with charges punishable by death:
He was brought to trial in September; meanwhile his imprisonment was of the harshest order. His indictment under statutes of 1 and 13 Elizabeth was under five counts: first, that he had obtained from the Roman See a "faculty", containing absolution of the queen's subjects; second, that he had published the same at Golden; third, that he had taught the ecclesiastical authority of the pope in Launceston Gaol; fourth, that he had brought into the kingdom an Agnus Dei and had delivered the same to Mr. Tregian; fifth, that he had said Mass.
Father Mayne offered a defense for each of these counts:

As to the first and second counts, the martyr showed that the supposed "faculty" was merely a copy printed at Douai of an announcement of the Jubilee of 1575, and that its application having expired with the end of the jubilee, he certainly had not published it either at Golden or elsewhere. As to the third count, he maintained that he had said nothing definite on the subject to the three illiterate witnesses who asserted the contrary. As to the fourth count, he urged that the fact that he was wearing an Agnus Dei at the time of his arrest was no evidence that he had brought it into the kingdom or delivered it to Mr. Tregian. As to the fifth count, he contended that the finding of a Missal, a chalice, and vestments in his room did not prove that he had said Mass.
He was condemned in September but not executed by hanging, drawing, and quartering until November 30, 1577.
We should remember that Mr. Tregian, Sir Francis Tregian, suffered for receiving that his contact with Father Mayne and for almost receiving the agnus dei and copy of the Papal Bull:
Tregian was indicted under the Statute of Praemunire prohibiting dissemination of papal bulls. Mayne had a souvenir copy of a proclamation regarding the 1575 Holy Year dispensation, and it was supposed that he intended to give it to Tregian. Tregian was held in the Marshalsea for ten months before being returned to Cornwall for trial. At first the jury would return no verdict, but after threats from the judges a conviction was obtained.

Tregian's death sentence was remitted to imprisonment and his property confiscated. He was incarcerated at Windsor and then in various London prisons for twenty-eight years, eventually winding up at Fleet Prison, where his wife joined him. On the petition of his friends, he was released by King James I. . . .
Agnus Dei, qui tollis peccati mundi, miserere nobis.