In the Essays of Elia, Charles Lamb reflects on saying "Grace Before Meat" and like Chesterton, wants to add occasions of gratitude--but he wants specially written "forms":
THE custom of saying grace at meals had, probably, its origin in the early times of the world, and the hunter-state of man, when dinners were precarious things, and a full meal was more than a common blessing; when a belly-full was a windfall, and looked like a special providence. In the shouts and triumphal songs with which, after a season of sharp abstinence, a lucky booty of deer's or goat's flesh would naturally be ushered home, existed, perhaps, the germ of the modern grace. It is not otherwise easy to be understood, why the blessing of food -- the act of eating -- should have had a particular expression of thanksgiving annexed to it, distinct from that implied and silent gratitude with which we are expected to enter upon the enjoyment of the many other various gifts and good things of existence. I own that I am disposed to say grace upon twenty other occasions in the course of the day besides my dinner. I want a form for setting out upon a pleasant walk, for a moonlight ramble, for a friendly meeting, or a solved problem. Why have we none for books, these spiritual repasts -- a grace before Milton -- a grace before Shakespeare -- a devotional exercise proper to be said before reading The Fairie Queene? . . .
Eighth Day Books has used the selection in bold italic for one of its bookmarks, free with the purchase of any book!!
I think one form will do for any of the occasions Chesterton and Lamb mention: 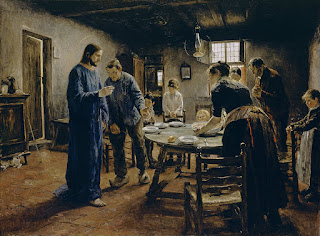 Bless us O Lord and these thy gifts, which we are about to receive, through Christ our Lord. Amen.
Neither author considers expressing gratitude after the experience of the concert, the opera, the pleasant walk, The Faerie Queene:
We give Thee thanks, Almighty God, for all thy benefits, Who live and reign for ever and ever. Amen.
Charles Lamb cared for his beloved sister Mary throughout his life, protecting her from condemnation when she killed their mother during a fit of "lunacy" as authorities called it (there was no insanity defense at that time). He kept her out of public "mad houses" but she and he both spent time in asylums when their madness was out of control. More on Charles Lamb here. More on eighteenth century insane asylums here.
Image Credit (public domain): Grace before the Meal, by Fritz von Uhde, 1885
Posted by Stephanie A. Mann at 12:00 AM