Another Newman Poem Set to Music 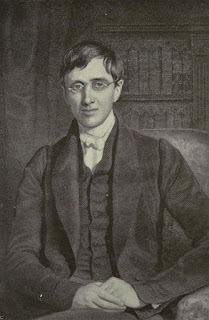 In June, I posted some comments on the concert featuring two settings of St. John Henry Newman's Meditation (by Sir James MacMillan and Will Todd). Today, I highlight another of Newman's poems set to music, this time by James Whitbourn, in a commission for the choir of Oriel College (which Newman served as Fellow and Tutor). The poem is titled "Solitude":There is in stillness oft a magic power
To calm the breast, when struggling passions lower;
Touch'd by its influence, in the soul arise
Diviner feelings, kindred with the skies.
By this the Arab's kindling thoughts expand,
When circling skies inclose the desert sand;
For this the hermit seeks the thickest grove,
To catch th' inspiring glow of heavenly love.
It is not solely in the freedom given
To purify and fix the heart on heaven;
There is a Spirit singing aye in air,
That lifts us high above all mortal care.
No mortal measure swells that mystic sound,
No mortal minstrel breathes such tones around,—
The Angels' hymn,—the sovereign harmony
That guides the rolling orbs along the sky,—
And hence perchance the tales of saints who view'd
And heard Angelic choirs in solitude.
By most unheard,—because the earthly din
Of toil or mirth has charms their ears to win.
Alas for man! he knows not of the bliss,
The heaven that brightens such a life as this.
You may read an analysis of this poem here, by Professor Barb Wyman of McNeese State University in Lake Charles, Louisiana on the Cardinal John Henry Newman website. He wrote this poem in Oxford during the Michaelmas Term (between the first of October and December 17) in 1818. It is the first poem in his Verses on Various Occasions.
The work premiered during Trinity Term in 2019:
Sunday 12th May: Craig Ogden, Guitar

Visiting Musician, classical guitarist Craig Ogden, will perform in the first recital. You are encouraged to remain for Choral Evensong at 6pm, during which Craig Ogden will perform with the Chapel Choir with music including the premiere of Solitude by James Whitbourn.
Here's a performance by the Houston Chamber Choir with quite a bit of amplification. I prefer this recording from Oxford University Press 2020 Choral Highlights. More about the composer here.
I found that I had to have the text in front of me as I listened to either version which is another reason I preferred the OUP recording without the distraction of the videography in the Houston performance.
Posted by Stephanie A. Mann at 12:00 AM