St. John Henry Newman and Our Lady of Sorrows 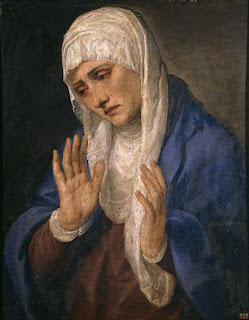 I've been working my way through the articles by John R. Griffin posted on the Christendom College website, and finished his survey of "Newman and the Mother of God" yesterday. As Griffin explains:
My paper has three parts. The first is concerned with what might be loosely called the “tractarian” view of Mary, namely the Marian devotions put forward by Newman and his mentor John Keble during the first Oxford Movement. The second part consists of a description of the Anglican charge to the effect that Roman Catholics, as part of their system, encouraged or at least tolerated the “worship” of Mary. The third and final part is concerned with Newman’s writings on behalf of the Dogma of the Immaculate Conception and the devotions that surround Mary.
You may read the rest there. I'm going to jump to the end, "the third and final part" in which Griffin comments:
Notwithstanding his shyness or reticence on the matter of public declarations of his love for Mary, Newman has written some of the most beautiful devotional statements ever made about Our Blessed Mother. In his Meditations we have many examples of his abundant love for the Mother of God . . .
As an example of this love and devotion, Newman wrote a series of meditations on the Litany of Loretto for the month of May. From May 17 to 23, he focused on Our Lady's Dolours or sorrows, as the Church does today with the Memorial of Our Lady of Sorrows (yesterday we celebrated the Feast of the Exaltation of the Holy Cross--please note the hierarchy of the celebrations!). Here's a sample:
Mary is the "Vas Insigne Devotionis," The Most Devout Virgin

TO be devout is to be devoted. We know what is meant by a devoted wife or daughter. It is one whose thoughts centre in the person so deeply loved, so tenderly cherished. She follows him about with her eyes; she is ever seeking some means of serving him; and, if her services are very small in their character, that only shows how intimate they are, and how incessant. And especially if the object of her love be weak, or in pain, or near to die, still more intensely does she live in his life, and know nothing but him.

This intense devotion towards our Lord, forgetting self in love for Him, is instanced in St. Paul, who says. "I know nothing but Jesus Christ and Him crucified." And again, "I live, [yet] now not I, but Christ liveth in me; and [the life] that I now live in the flesh, I live in the faith of the Son of God, who loved me, and delivered Himself for me." [Note 2]

But great as was St. Paul's devotion to our Lord, much greater was that of the Blessed Virgin; because she was His Mother, and because she had Him and all His sufferings actually before her eyes, and because she had the long intimacy of thirty years with Him, and because she was from her special sanctity so ineffably near to Him in spirit. When, then, He was mocked, bruised, scourged, and nailed to the Cross, she felt as keenly as if every indignity and torture inflicted on Him was struck at herself. She could have cried out in agony at every pang of His.

This is called her compassion, or her suffering with her Son, and it arose from this that she was the "Vas insigne devotionis."
The rest of Newman's meditations on Our Lady's Dolours may be found here at the Newman Reader.
Our Lady of Sorrows, pray for us!
St. John Henry Newman, pray for us!
Image Credit (public domain): "Madonna in Sorrow", by Titian, 1554
Posted by Stephanie A. Mann at 12:00 AM