Preview: Praying for the Intercession of St. John Fisher on the Son Rise Morning Show 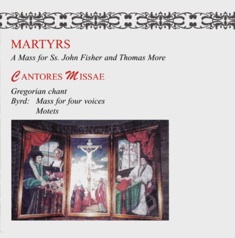 As a preparation for the feast of Saints John Fisher and Thomas More, I've been listening to this CD of a Mass featuring the Propers for their Feast (the Introit, Gradual, Alleluia, Offertory, and Communion antiphons), William Byrd's Mass for Four Voices, and four motets, also composed by William Byrd. I purchased it from Aid to the Church in Need UK. It's recorded by Cantores Missae:1. Introit – Multae tribulationes (chant)
2. Kyrie
3. Gloria
4. Gradual & Alleluia – Accedire ad eum (chant)
5. Credo
6. Offertory – Mirabilis Deus (chant)
7. Motet – O quam gloriosum*
8. Motet – Justorum animae*
9. Sanctus & Benedictus
10. Agnus Dei
11. Communion – Oves meae (chant)
12. Motet – Ego sum panis vivus
13. Motet – Ave verum corpus
I've also been preparing for their feast by arranging a couple of interviews on the Son Rise Morning Show--one on St. John Fisher tomorrow June 22, on their shared feast (the anniversary of his martyrdom in 1535) and one on St. Thomas More on July 6, the anniversary of his martyrdom the same year. We're going to focus on each of them, not just as the great models of faithfulness they were on earth, but also on their heavenly role as intercessors. PLEASE NOTE WELL (N.B.): I'm on the show at an earlier time than usual: 6:20 a.m. Central/7:20 a.m. Eastern. You may listen live here on EWTN or on your local EWTN affiliate. 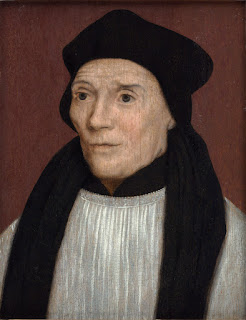 It's appropriate to intercede with Saint John Fisher, Bishop of Rochester, named a Cardinal by Pope Paul III while Fisher was in the Tower of London, for our bishops, archbishops, and cardinal archbishops.
Years ago, at our annual Midwest Catholic Family Conference here in Wichita, Kansas, a bookstore named for St. John Fisher brought hundreds of books from Jacksonville, Illinois to sell. Each time (many, many times) I bought a book from their booth, I received a holy card with a Prayer for Holy Bishops by St. John Fisher:
Lord, according to Thy promise that the Gospel should be preached throughout the whole world, raise up men fit for such work. The Apostles were but soft and yielding clay till they were baked hard by the fire of the Holy Ghost. So, good Lord, do now in like manner with Thy Church militant, change and make the soft and slippery earth into hard stones. Set in the Thy Church strong and mighty pillars that may suffer and endure great labors--watching, poverty, thirst, hunger, cold and heat--which also shall not fear the threatenings of princes, persecution, neither death, but always persuade and think with themselves to suffer with a good will, slanders, shame, and all kinds of torments, for the glory and laud of Thy Holy Name. By this manner, good Lord, the truth of Thy Gospel shall be preached throughout the world. Therefore, merciful Lord, exercise Thy mercy, show it indeed upon Thy Church. Amen.
According to the holy card, St. John Fisher included this prayer in a sermon he preached in 1508, 27 years before his martyrdom. It was part of his sermon on Psalm 101 in a series on the Seven Penitential Psalms.
It's also appropriate to ask Fisher's intercession for the defense of marriage; he defended the validity of Katherine of Aragon's marriage to Henry VIII, acting as her counselor. Cardinal Wolsey had asked him to study the matter in 1527 and he reported to Wolsey and the king that the declaration of nullity of her previous marriage to Arthur, the Prince of Wales, was indeed valid and that Henry and Katherine were validly, sacramentally, and truly married. Once Fisher had reached that conclusion he never wavered. In the Convocation of Bishops and at the Legatine Court in 1529, he defended his position.
He's also an appropriate patron saint of university administrators and theology professors, because of his efforts at Cambridge and Oxford University to found chairs of divinity with the help of his patron the Lady Margaret Beaufort, Henry VIII's grandmother. Fisher was Chancellor of the University of Cambridge for life in 1514 (until Henry VIII intervened, of course).
Finally, it's indeed appropriate to ask St. John Fisher to intercede for us to remain faithful to Jesus, to live simply, detached from worldly pleasures, and to be attentive to our duties. Throughout his service at Bishop of Rochester he was remarkable at that time for being resident in the diocese, fulfilling his duties as teacher and priest to his people, for his simplicity of living and generosity to the poor.
Saint John Fisher, pray for us!
Posted by Stephanie A. Mann at 12:00 AM