Book Review: The Fathers and "The Our Father" 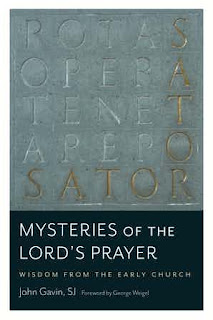 I purchased a copy of this book from Eighth Day Books and a few copies are still available. According to the publisher, Catholic University of America Press:The Lord’s Prayer contains mysteries generally overlooked by most Christians. For the Fathers of the Church, such mysteries or "difficulties"—many of which continue to puzzle modern scholars—marked divinely inspired points for prayer and reflection. Saints Cyprian of Carthage, Augustine of Hippo, Peter Chrysologus, Maximus the Confessor and others grappled with the hidden meanings behind these questions and the fruits of their efforts can inspire contemporary readers.

In this volume John Gavin, SJ explores eight mysteries of the Lord’s prayer in light of the early Church’s wisdom: How can human beings call God "Father"? Where is God the Father? How can God grow in holiness? Was there ever a time when God did not rule? Are there limitations to God’s will? Why should we seek bread? Can we make a deal with God? Does God tempt us? Without ignoring the insights of contemporary exegesis, this volume demonstrates that the responses of the Fathers to these questions have continuing relevance. Not only did they understand the issues surrounding linguistic, textual, and theological difficulties, but they also grasped the nuances of Christ’s words as illuminated by the scriptures as a whole. They provide an interpretation that challenges the mind and transforms the heart.

Mysteries of the Lord's Prayer offers the general reader, as well as scholars, a chance to rediscover a prayer that unites Christians throughout the world. It also includes appendices to aid those who wish to explore the Fathers’ writings on their own for a deeper encounter with the wisdom of the early Church.
Table of Contents (including subheads in each chapter):
Foreword by George Weigel
Acknowledgements
Introduction
Chapter 1. Entering the Mysteries
The Earliest Commentary on the Lord's Prayer (the ROTAS-SATOR Square in Pompeii)
Which Version is the Real Lord's Prayer? (Matthew 6:9-13; Luke 11:2-4; the Didache)
Why Reflect on the Lord's Prayer?
How to Proceed?
Chapter 2. First Aporia: How can Human Beings Call God "Father"?
Confronting a Bold Claim
Divine Unknowability
Human Sinfulness
Responding to the Problems
Divine Adoption
Growing in the Divine Likeness
Conclusion: Becoming Children of God
Chapter 3. Second Aporia: Where is God the Father?
"Heavens" or "Heaven"?
"Heaven and Earth": The Created Cosmos
Uniting "the Heavens" with "Earth and Heaven"
The Pilgrimage toward Heaven
Conclusion: A Pilgrimage to Heaven
Chapter 4. Third Aporia: How Can God Grow in Holiness?
Is Anything Sacred?
The Holiness of God's Name in the Scriptures
What's in a Name?
Honoring "the Name" in Matthew and Luke
The Fathers Hallow the Divine Name
The Sacred Name
The Meaning of Holiness
Hallowing the Name
Conclusion: Hallowing the Name Today
Restoring the Sacred
The Name as Love and Mission
Chapter 5. Fourth Aporia: Was There Ever a Time When God Did Not Rule?
The Coming of the Kingdom
God's Reign in the Old Testament
God's Universal Rule
God's Rule Over Israel
N.T. Wright: The Kingdom as a New Narrative
Gerhard Lohlink: Accepting God's Rule
Benedict XVI: Christ and the Kingdom
The Fathers and the Kingdom
Defining the Kingdom
Locating the Kingdom
Expecting the Kingdom
Conclusion: Calling for the Kingdom of God
Chapter 6. Fifth Aporia: Are There Limitations to God's Will?
Preliminary Considerations
The Position of the Petition in the Lord's Prayer
The Obedience of Jesus
The Fathers Seek God's Will
Equality with the Angels
Reforming the Will
Jesus's Cup
Conclusion: Your Will Be Done
Chapter 7. Sixth Aporia: Why Should We Seek Bread?
Some Problems in the Text
The Two Versions of the Petition
The Meaning of "Bread" in the Scriptures
The Meaning of Epiousios
The Bread of the Fathers
Material Interpretations
Spiritual Interpretations
The Fathers and Epiousios
Conclusion: The Fathers and the Bread of Life
Chapter 8. Seventh Aporia: Can We Make a Deal with God?
A Puzzling Petition
The Two Versions of the Petition
Winning God's Forgiveness?
The Meaning of Debts
Forgiveness and the Fathers
Creation in Debt
How Can We Ask God to Imitate Us?
Conclusion: Forgive Us Our Sins and Debts
Chapter 9. Eighth Aporia: Does God Tempt Us?
Trial or Temptation?
"Peirasmos" as Trial
"Peirasmos" as Temptation
The Evil One in the End Times
The Fathers on Trials and Temptations
The Nature of Temptations and Trials
God Allows Temptations and Trials for a Time
Conclusion: Times of Temptation, Trial, and Hope
Conclusion
1. Divine Adoption
2. Pilgrimage
3. The Greater Glory of God
4. Citizen of the Kingdom
5. Conformity to the Divine Will
6. The Bread of Life
7. Forgiveness
8. Sharing in the Sufferings of Christ
9. Hope
Appendix: Brief Portraits of the Fathers
(Augustine of Hippo, Chromatius of Aquileia, Cyprian of Carthage, Cyril of Jerusalem, Evagrius Ponticus, Gregory of Nyssa, Jerome of Stridon, John Cassian, John Chrysostom, The Master, Maximus the Confessor, Origen of Alexandria, Peter Chrysologus, Tertullian, Theodore of Mopsuestha)
Bibliography
Scripture Index
General Index
Each aporia is a difficulty with the phrase or petition under consideration in the chapter; Father Gavin explores the issue, sites some important translation issues, variations in the versions of The Lord's Prayer, certain passages from the Old and New Testaments, and then delves into how the Fathers of the Church, listed above, dealt with the issue, and prayed the prayer.
This commonly used prayer can only be understood in and through the Church, with the Apostolic Preaching of all the Scriptural and Traditional handing on the Truths of God's Divine Revelation. Otherwise, we either mouth the words unthinkingly, without recollection or reflection, or we get caught up in our own interpretations. We need to pray The Our Father in the context of Christian doctrine, morals, and worship.
Although this kind of book might not be considered spiritual reading, I found the passages from the Fathers and the Conclusion of each chapter inspirational for my Holy Hour prayer time in Adoration before the Blessed Sacrament. Recommended.
Posted by Stephanie A. Mann at 12:00 AM

Email ThisBlogThis!Share to TwitterShare to FacebookShare to Pinterest
Labels: book reviews, Catholic University of America Press, John Gavin SJ, Mysteries of the Lord’s Prayer, the Fathers of the Church, The Our Father, Wisdom from the Early Church