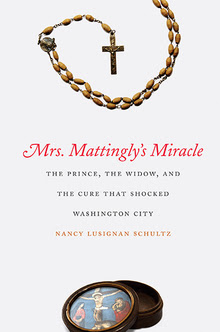 I purchased this book because of Thomas Babington Macaulay's mention of "the miracles of Prince Hohenlohe" in his review of Leopold von Ranke's History of the Popes, cited here. According to the publisher, Yale University Press:

In 1824 in Washington, D.C., Ann Mattingly, widowed sister of the city's mayor, was miraculously cured of a ravaging cancer. Just days, or perhaps even hours, from her predicted demise, she arose from her sickbed free from agonizing pain and able to enjoy an additional thirty-one years of life. The Mattingly miracle purportedly came through the intervention of a charismatic German cleric, Prince Alexander Hohenlohe, who was credited already with hundreds of cures across Europe and Great Britain. Though nearly forgotten today, Mattingly's astonishing healing became a polarizing event. It heralded a rising tide of anti-Catholicism in the United States that would culminate in violence over the next two decades.