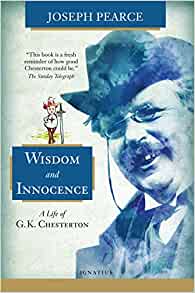 It seems like I've been reading this book forever! We started reading it in our local Chesterton Society group late in 2019 I think, three chapters at a time, although we sometimes only got through two chapters during our monthly discussions. Then because of COVID, we had to skip several meetings, both in the spring of 2020 and particularly at the end of the year. My late brother and I were both in the hospital in December; then Steven died on the second day of January and we met on the second Friday of that month to pray a Rosary for the repose of his soul, and then it was bitterly cold in February so we cancelled. A smaller group of us finally met in March this year, and a larger group gathered on the Friday in the Octave of Easter this month.
We determined then we'd all read the last four chapters, hope to get through two of them in May and finish our discussion of this book in June! Next month we'll decide what to read next: we're leaning toward either Chesterton's study of Charles Dickens or his book about Geoffrey Chaucer. I'm in favor of either, but we'll vote so that Eighth Day Books may obtain the book for us and we'll start discussing it in July!
Wisdom and Innocence: A Life of G.K. Chesterton is an excellent biographical study, combining the narrative of Chesterton's life with a comprehensive review of his works, their reception at the time, and their influence on other writers like C.S. Lewis, Christopher Dawson, Dorothy L. Sayers, and many others. Pearce's vivid description of the Chestertons' (Gilbert and Frances) domestic life is well-matched by his recounting of their travels to the Holy Land, the U.S.A., Ireland, etc.
One theme we did comment on several times, because we had previously (in 2016) read Nancy Carpentier Brown's The Woman Who Was Chesterton, was how Pearce's biography was considerably more favorable toward Chesterton's sister-in-law, Ada Chesterton (his brother Cecil's wife/widow) than Brown's view of her in the context of Frances' life. In Pearce's narration, she seemed more sympathetic to Chesterton and his work, while Brown highlights Frances' negative reaction to Ada's biographical work The Chestertons.
There was one error I spotted: one page 381 in the chapter "Rome and Romance" Pearce mentions that the Chestertons were in Rome for the "Beatification of the Forty Martyrs of England and Wales"--that's incorrect: 136 Martyrs of England and Wales were beatified in 1929 by Pope Pius XI. Twenty-nine of those beatified in that group would be canonized among the 40 Martyrs of England and Wales in 1970 by Pope Paul VI.
It was difficult for me to read the last pages, describing Chesterton's death and Frances' grief--too close to my own feelings; I had to put the book down for a day before I could finish it.
I think this biography is one of Joseph Pearce's greatest achievements. Highly recommended.
Posted by Stephanie A. Mann at 12:00 AM